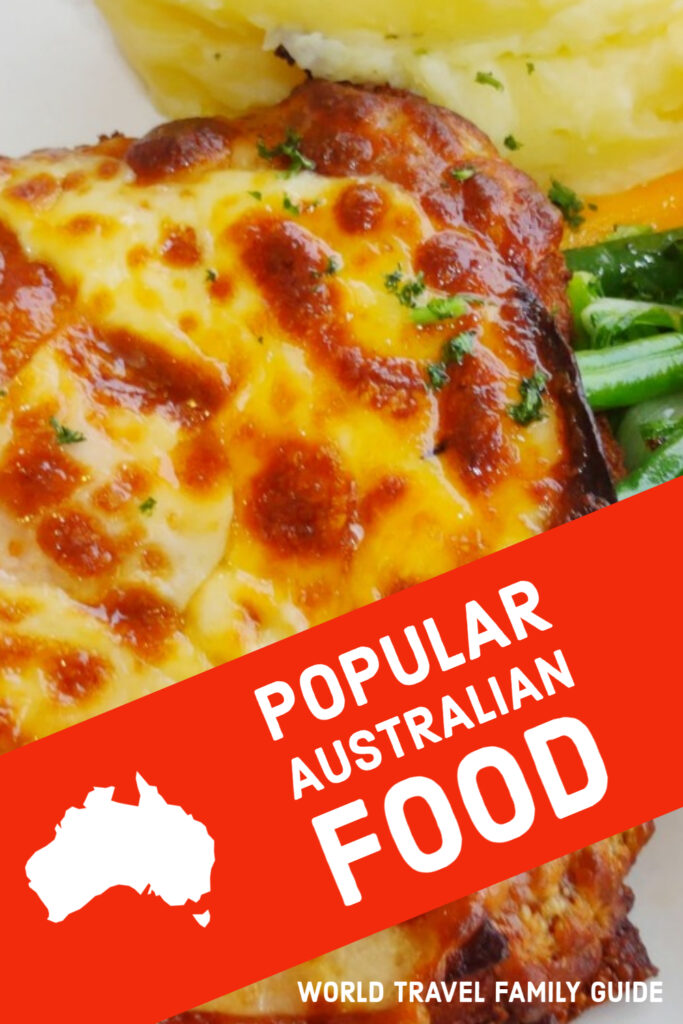 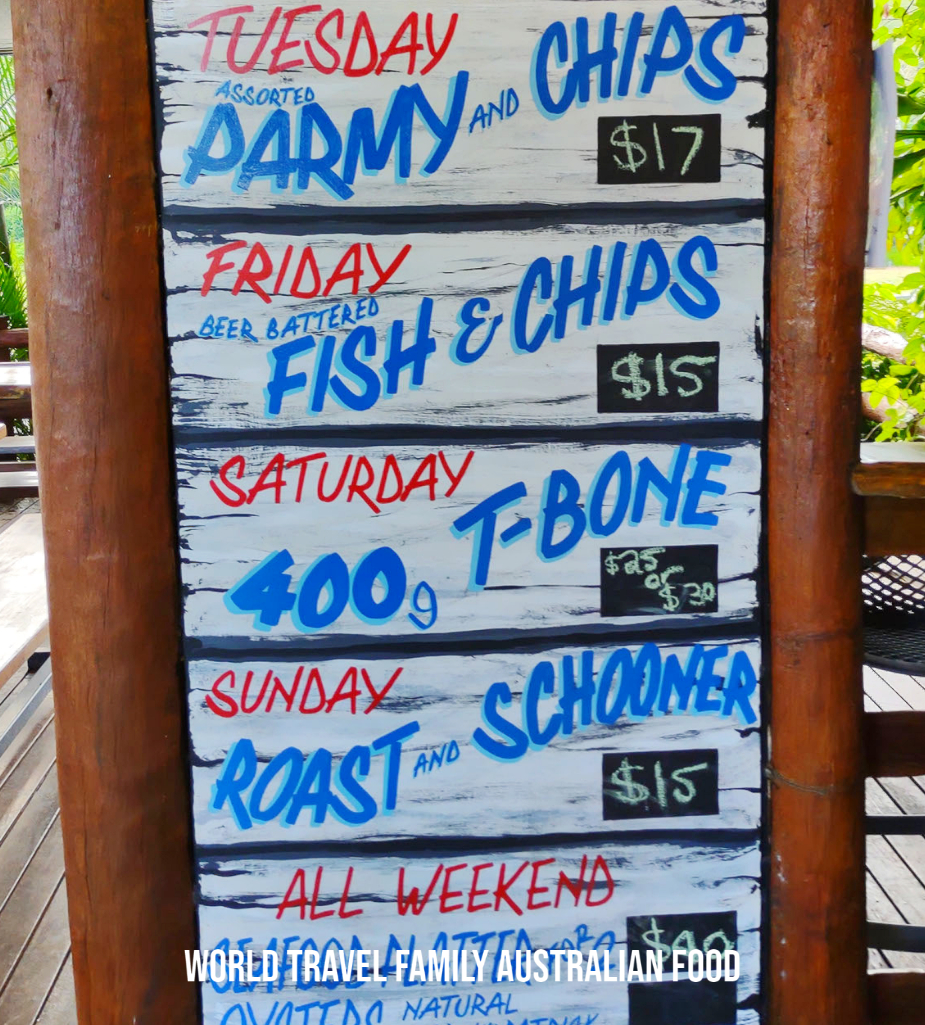 You can see which foods are popular in Australia, by which dishes appear most regularly on menus. My husband is a chef. There is always steak, a burger, fish and chips, and seafood.

In this blog post we’ve presented common popular Australian food, the foods my husband ate during his childhood in Australia, and prepared later as an Aussie chef. We also include the dishes that are popular on most Australian restaurant menus today. It’s rare to find a mid-range restaurant without a parmy, for instance, as well as street food, foods to grab, breakfasts, lunches and dinners.

Some of the most popular Australian food traditions feature local produce and flavours, often very plainly cooked. For instance, prawns, yabbies, and barramundi are commonly eaten and popular.

The bush tucker of Australia’s native indiginous people has been consumed for thousands of years. Foods such as sea turtle, goana, and emu, sometimes roasted in paperbark, are the foods of the land and sea.

Seafood is, of course, popular in Australia, with most of the population living on the coast, but Australia is also a big producer of beef, along with dairy and many Australian fruits and vegetables. You will find tropical fruits as well as more temperate produce. Australia, being a huge country, has the climate to grow and raise many foods.

Some of the popular Australian foods in the list below, you may not have heard of, we give you a brief description of each to help you out.

I doubt you’ll get out of Australia without trying a parmie. Chicken Parmigiana, to give it its full name, is basically chicken schnitzel, with extras. The dish is hugely popular with many pubs, clubs, and mid-range restaurants having “Parmie Night”. The parmie usually comes served with potato chips (fries, called hot chips in Australia) or mashed/boiled potatoes and salad.

The origins of the Aussie chicken parmie seem to lie in Europe. Italian communities moving to Australia switched eggplant (aubergine) for chicken, making the first chicken parmie in the 1940s or 50s. The dish spread, populating every pub and mid-range restaurant country-wide. Interestingly, it’s not always called a “parmie”. The dish has regional abbreviations. Down south you’ll find it called “chicken parma” “parmy” or “parmi”. It is the equivalent of chicken parmesan in the US. I’ve never seen it in the UK but my parmie-loving son replaced it with schnitzel in most of Europe.

Meat pies are an Australian institution and it’s traditional to serve tomato ketchup on top. The meat pie moved to Australia with the first fleet way back in 1788. Sargents in Sydney were Australia’s first industrial meat pie producer, documented from 1906.

You can find Aussie meat pies in bakeries throughout the country or kept warm in gas stations and stores. Gourmet pies are better, of course, but the majority of pies sold in Australia are mass-produced for sale in supermarkets. Vegetarian and chicken pies are fewer, but they do exist. Fish pies are rarer, but if you can find a bakery that makes them, hopefully you will enjoy.

The meat pie’s sibling, the sausage roll can be found in similar outlets. It is a key component of what my husband grew up eating, the “surfers’ breakfast” of sausage roll and flavoured sweet milk drink.

There’s a fair bit of confusion over the world’s black yeast-based spreads. Vegemite is unmissably Australian but Marmite exists in the UK and New Zealand.

New Zealand Marmite is not the same as British Marmite, they’re totally different. The Kiwi Marmite is sweeter.

British Marmite is sold as ” Our Mate” in supermarkets in Australia to distinguish in from New Zealand Marmite.

As an Aussie, I should make out that I love true blue Aussie Vegemite, but actually I’m pretty indifferent to both Marmite and Vegemite. You make your own mind up!

Any way you look at it, if you don’t try Vegemite in Australia, it’s a wasted opportunity.

Barramundi became barramundi in the 1980s. Before then this Australian delicacy was usually called Asian or Australian sea bass. Barramundi as we know it is not unique to Australia, it is to be found through Southeast Asia, India, Sri Lanka, Papua New Guinea, and the tropics of Australia. It is farmed commercially in many countries, not least Australia, but wild barramundi, freshly caught, is a much nicer fish. A lot of the “barra” sold in Australia is actually imported

The word ” barramundi” is from an Aboriginal word for a big-scaled estuarine fish.

Barramundi has a delicate flavour and very soft flesh. It’s not a meaty fish so the words “melt in the mouth” are often applied to barramundi flesh. It’s an easy fish, no strong flavours here. This fish, along with sea turtles, is a tasty snack for saltwater crocodiles. It’s common to find barramundi deep fried in batter or in barra burgers. Up-market restaurants will handle their barra more delicately.

There are a whole bunch of different types of prawns that are popular in Australia, including tiger prawns and banana prawns. Most are large, if not huge. Australians do not call prawns shrimp. A shrimp is a much smaller crustacean. A prawn cocktail is a prawn cocktail, even if fairly small prawns are involved. This ongoing prawn/shrimp controversy involves Paul Hogan prior to his role as Crocodile Dundee. He was responsible for “Chuck another shrimp on the barbie” in an advertisement designed to attract US visitors “Downunder”.

Prawns are popular at Christmas and holidays and are usually served cooked and chilled. A bucket of prawns is a popular pub, club or restaurant dish, as is a prawn salad or prawn “sanga” or sandwich.

Is vegetarian and vegan food popular in Australia? Yes and no. Vegetarian and vegan food is fairly easy to find and most supermarkets will have a good supply of everything a vegan could need. If you’re in more remote parts of the country, this will become more difficult. Is vegetarian and vegan food popular with staunch meat-eaters? No, absolutely not. But it is usually not too difficult to find. There is a tendency to add ham or bacon to just about anything, particularly sandwiches or baked goods, so outside of cities this could be an issue for you. Things are changing and the availability of plant-based dishes on menus gets better every day.

Kangaroo Meat and Other Native Animals Popular in Australia

I wouldn’t say that these unusual meats were commonly eaten, but they are popular, judging by the number of restaurant menus they appear on. Kangaroo meat is popular, you’ll see it in every supermarket, even in the form of sausages. Our local butcher also had crocodile sausages, alongside the roo.

I have seen and eaten kangaroo, crocodile, emu, and camel in restaurants in Australia. Many native and resident Australian animals can be eaten. They’re often there for novelty value, but if they didn’t sell, they wouldn’t be featured.

Kangaroo meat is tasty but can be dry, with a strong gamey flavour. It will be venison-like if you get the cooking right and if you want game in Australia, you’ll probably have to settle for kangaroo. It’s pretty rare to find venison, pheasant, or other traditional European game animals in Australia. In contrast, emu and ostrich have been farmed for meat here.

If you visit an Australian crocodile attraction in Queensland or the Northern Territory you’ll probably be visiting a crocodile farm. You might not realise it, but that croc shows stems from farming these animals for meat and skins. Places like these often have crocodile pies or smoked crocodile on the menu. Farmed crocodile tastes like wet chicken. The crocs are fed the laying chickens once they get too old to produce eggs.

We have a full post covering native and imported animals in Australia and eating them.

Roast lamb with all the trimmings is a popular family dinner for those in Australia who enjoy cooking the old-fashioned way. Because Australia is so hot, roasting meat like this indoors can raise your cooling bills. This is one reason why barbecue food is so popular in Australia today.

Melbourne and coffee go together like Seattle and Starbucks. Victoria, as a whole, is famous for its coffee obsession and, of course, Victorians think they have some of the best coffee in the world. Coffee is big news in Australia and coffee farms can be tourist attractions.

The beans herein Australia are different, so expect a different flavour along with different names. For instance, the closest thing to an “Americano” is a “long black”. Both Robusta and Arabica beans can be found in Australian coffee.

Let us know in the comments if you have a favourite popular Australian food we didn’t think of. We can, and will, add to this post over time, we keep every post on this site updated. We cover many cuisines from around the world, along with dozens of posts about destinations and travel in Australia. We’ve owned a house in Australia for a very long time and one member of the team is an Australian-trained Chef, learning his craft in Sydney New South Wales before furthering his career in London. We love creating food posts, take a look at our “world food” category for more. Our Australia travel blog page gives you plenty of information on travel in Australia. We also cover Australia with kids, places to see in Queensland, destinations in The Northern Territory, Western Australia, and our home base, Port Douglas Australia.

Are Aussie meat pies much different from the ones in NZ?

I doubt it. A meat pie is a meat pie. And I don't eat meat pies. I'll get the boys onto that when we go to NZ next.