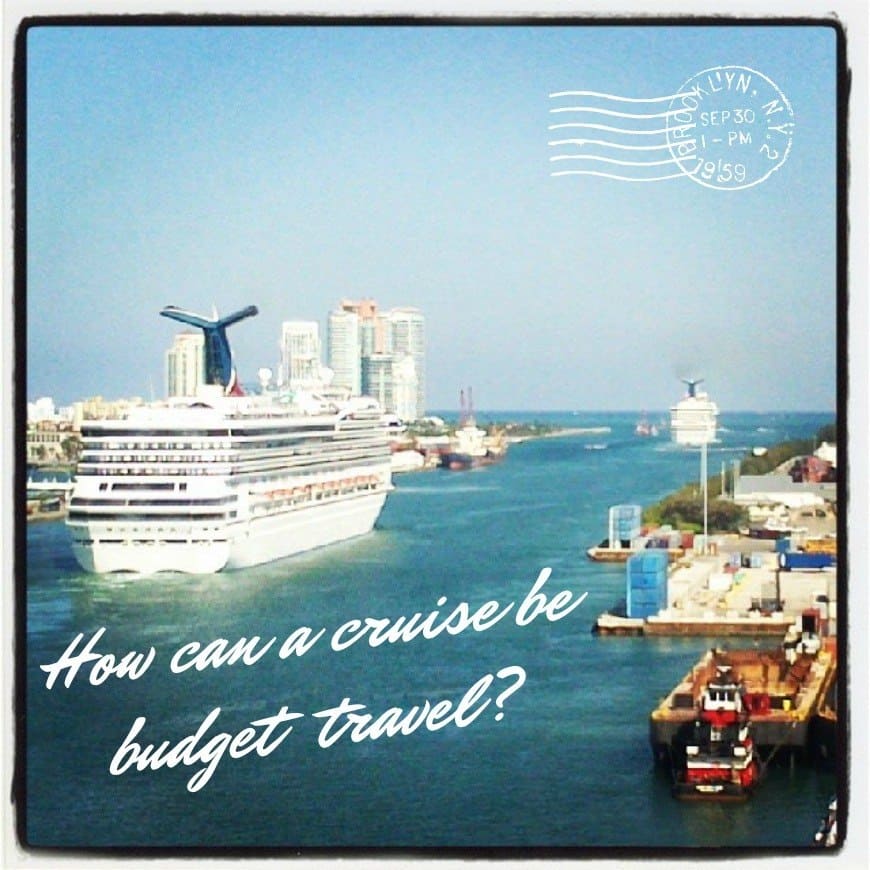 During our first year of full time travel ( our family gap year, if you like) we were on a tight budget. We kept to around $50 per day in South East Asia and the whole year came in at $100 per day. During that year we took two cruises. Both were trans Atlantic repositioning cruises. So how can you take a cruise as a budget traveller or backpacker, how can you make a cruise budget travel? Here’s how.

How to Make Cruising Fit With Budget Travel or Backpacking

We never expected to be going on a cruise!

When we set out on this trip, our plan was to spend a few years in South East Asia and the Indian Subcontinent. We worked out, based on the amount of money we had in the bank, we could last 4 years if we spent $41/day.

We’ve found that budget pretty OK, we’re probably spending more like $50/day plus the odd splurge when I make some money.

But life happens, we’ve ended up heading to the UK for Christmas for family reasons. We can be cheap there, no accommodation costs, that fits our budget fine.

But next year we blow our budget out of the water. We’re going on a cruise and then to the Americas!

Why Did We Want to Go on a Cruise?

Mostly for the experience. We want to give the kids ( and ourselves) as many diverse experiences as we can. We saw this cruise advertised and it just looked like a great opportunity.

It’s the maiden voyage of a brand new cruise ship as it relocates from the European shipyards to its new home in Miami.

It’s what’s called a relocation cruise or repositioning cruise, these are the bargains of the cruising world. They usually happen when ships relocate with the changing seasons. They take you from A to B rather than in a loop, so you can use them as a form of transport.

At $700 each, it’s not that much more than flying across the Atlantic and food, drinks, accommodation and entertainment are generously covered for 10 days.

The ship looks AMAZING! It has everything from an ice bar to a huge nightly magic show in a purpose-built two story theatre.  It has all the usual on-deck pools and slides, but in January I don’t think we’ll be using them.

There is loads for the children to do, their eyes lit up when they saw the computer games room with its giant screens. I’m just looking forward to something completely different, something I’ve never done before, or even considered doing.

I’ve been collecting pictures of the ship on a new Pinterest board, if you’d like to see. She’s vast, 5th biggest in the world.

My mum and dad go on cruises, they enjoy dinner dances and shows, but from what I can see, cruising doesn’t have to be like that. Cruising can offer a lot to families like ours if you pick the right ship and right cruise line.

Fancy dressed-up dining isn’t our thing, good food is. I’ve posted before about how travel makes me thinner, I reckon all that is going to change. I have a feeling we’ll have to update our wardrobes and not just because of the cold.

After we pull into New York harbour, past the Statue of Liberty, we’re going to stay in the States. Probably for 3 months, as that is the length of the visa, and have ourselves a big old road trip!

Then we have to fly out to somewhere more remote than Canada or Central America, those are the visa restrictions. We’re thinking maybe we’ll go to Peru and cuddle some alpacas.

Update: Read about how our cruise went here. We loved it! So much so that we’ve booked a return Atlantic crossing cruise in April. This time it’s only costing us $320 each, under $30/day, for a family cabin with balcony. Even more of a bargain!

What Will Our Budget be for the USA?

At the moment I have no idea, it will be a lot more. We’re not going to scrimp, we’re not missing out on all the big-ticket attractions although we will be very frugal with food and accommodation. We will most certainly be visiting Disney ( we managed to visit all 4 Disney parks in one day!) and Kennedy Space Centre again, they’re too good to miss. But we will do this thing as cheap as we can.

Update: We have now completed our USA road trip, that was also wonderful. Click the link to read more about it.

We won’t run out of money while we’re there, but by the end of next year we’ll have to come back to the UK and James will get a job. But that’s cool, it will only be for a few months, we can set off for India and Nepal after that and start living cheaply again. Or, who knows, another opportunity might present itself. That’s the beauty of having the total freedom that we have now.

So no, we’re not giving up on our extreme budget travel lifestyle, we haven’t had enough, it’s not a cop out , we’re just doing something a bit different for a while. We quit our old life to travel and to have our freedom. The freedom to bob about on the Atlantic for over a week is part of that.We think it will be fun!

Hi Alyson, I have recently discovered your blog and am enjoying about your adventures immensely. Just wondering if anyone knows how best to locate the "repositioning" cruises - to grab a great deal?

Hi Nicki, Norwegian's own website has good prices in the specials section. Or try vacationstogo.com or discountcruises.com. Did you find our post about how our cruise on Norwegian went? It was awesome it's here https://worldtravelfamily.com/whats-trans-atlantic-cruise-like-atlantic-crossing-on-norwegian-getaway/

Awesome! When I read the title of your post I assumed that your husband had taken a job on a boat. Thanks for the tip on cheaper cruising. We just did a 2 day "cruise" in Halong Bay, Vietnam and it really got me thinking about the benefits of cruising as a holiday option, before we've always disregarded it as too expensive and too restrictive. Your post has come at an opportune moment for me!

Hi there! Loved stumbling on your family blog. my dream is to travel around the world with our three kids at some point in the future! I would love to meet you guys in person if you are headed through the DC area! We live just north of DC and would love to connect! Cheers! chelsea hudson

Don't forget to check when the 2014 Disney Homeschool days are or if there is a Disney Homeschool class (through Disney YES) going on for when you are in FL. We haven't tried one of them yet but if you are enrolled in it then my understanding is that you can get discount tickets for the park.

We took our kids on their 1st cruise in Feb (went to the Caribbean) and they LOVED it. Such a fun vacation. It was such a different trip from taking them to Yellowstone over the summer.

Sounds great and just the thing to top up your experience of living abroad.

I went on a one week cruise in Egypt and I really liked it as it was quite small ( about 100 people) and being that the guests were mainly German, less of the "do this-do that" situation and as a result, we went on the tours we wanted and were respectfully left alone when we didn't. The cabins were cosy and we got to know the Egyptian staff pretty well who all wanted to practise their English on me as I'm a teacher!