In 2001, pre-kids, Chef and I took on the Annapurna Circuit Trek in Nepal, it’s considered one of the best treks in the world. It’s a high altitude trek, reaching 5416m at the Thorong La, the highest pass. It’s long, it takes around three weeks to complete and it’s cold, in February, which was when we did it. It was one of the best experiences of our lives and not really something requiring training or high levels of fitness. Lets talk about the experience of Annapurna Circuit trekking. We returned to the Himalayas and Everest in 2016, 2018 and this year. In latter years with kids, links to those posts are here too.

The Annapurna circuit trek is certainly worth doing and being a circuit trek, rather than a there and back trek as Everest Base Camp is, in many ways it’s more interesting. You could take kids on the Annapurna Circuit, but safety would have to be your priority. The Thorong La crossing is the most dangerous and highest part of the trek. There are dangers from altitude and drops along the way. We have a short video below, we crossed the Thorong La in blizzard conditions, there was deep snow and many trekkers turned back. We had plenty of time so we waited it out until the worst of the snow storms had passed.

We have a little video of crossing the Thorong La below. In 2018 we went  to Everest Base Camp, in 2019 there will be another big trek with a lot more video as these days we have good video gear and sound.

Would we take on the trek again?

In a heartbeat. We haven’t yet been back, our recent treks have been in the Everest region, but we’d love to see this area again and maybe go further, into Mustang.

Would we take children trekking in the Himalayas?

We’d give it a go, we’d start and be ready to turn back if it was too much for them. The youngest child ever to trek to Everest Base Camp was six. EBC is only slightly higher but I believe it is a more strenuous trek with more altitude issues. I would certainly attempt the Annapurna Circuit with my children, but not be disappointed if we failed.

Update: In February, we returned to Nepal and took the kids, then aged 9 and 11, halfway up Everest. Later again, in October, with children aged 14 and 12 we took them to Everest Base Camp. I wouldn’t take kids as young as 6 to extreme altitudes.

Did we use porters and guides?

No. But when we took the kids to Everest the first time we had a Sherpa guide to help keep them safe. It was worth paying for but for adults we don’t think it’s necessary. For Base Camp, again, we went solo.

Were there other trekkers about?

A few, we quickly got to know the people walking in the same direction and made some lovely friends. We were almost always alone while we were walking and ended up chatting at lodges and restaurants along the way. If you wanted solitude it was easy to find a deserted lodge.

How did we find our way?

We bought a $2 map in Kathmandu. We mostly didn’t need it, there is basically a path, you follow it. The map was handy for planning where to stop at night. Once we were into deep snow, we occasionally referred to the map to work out which side of the valley we should be walking on, the path wasn’t so clear in the snow.

Where did we sleep?

In guest houses ( sometimes called tea houses )  along the way, there was no shortage of them and they were extremely cheap. At that time tourists were thin on the ground, many guest houses didn’t charge us on condition that we bought breakfast there. This still happens in the less touristed parts of the Himalayas, but on main tourist routes and popular treks costs can be high.

Very basic, but we were on a tight budget, you probably could have bought more luxury in larger villages. Once we were high in the snow we stopped washing, the water had to be boiled from snow and came in a bucket. It was too cold to shower.

Did we smell? We just seemed to smell of tea because we drank so much of it. At high camp, the last stop before the Thorong La, snow blew in through the cracked window and under the door, the toilet was frozen solid, but it was all part of the adventure.

What gear did we take?

For our Everest treks I didn’t take a sleeping bag to avoid the extra weight, I was fine with just  the lodge’s blankets, but these treks were at a warmer time of year.

What boots did we use?

I had a lightweight pair of suede, summer trekking boots bought for trekking in Thailand. So long as I kept hitting them with waterproofing ( borrowed), they did the job. No frostbite. Chef had serious winter trekking boots. He has since been as far as Namche in running shoes.

Were we actually trekking in fresh, deep, snow?

Yes, a couple of times, on the Thorong La it was thigh deep in places. On our first attempt at the pass we were driven back by a blizzad, it took us three attempts before we got over, in glorious weather and crisp snow. I have no photos of the top of the Thorong La, but I do have the Thorong La Video at the top of the page. Sorry about all the sniffing, the minus five degrees made my nose run. Would you believe, two enterprising Nepalis had set up a tea shop at 5416M?

How much weight did we carry?

I took my best trekking pack ever and filled it with around 10 Kg of gear. The chef had 72 L and he thinks he was carrying 15 Kg.

Do You Need To Be Fit To Complete The Annapurna Circuit?

We weren’t particularly fit. I was in my early 30s, the chef in his early 20s. We were probably of average fitness. We certainly hadn’t trained for the trek.

We’d been travelling and drinking plenty of beer for 5 months previously, carrying backpacks, so that probably helped a little.

Back home we were gym-goers, but neither of us had done anything you could call training in the months leading up to the trek. I don’t honestly think that Annapurna circuit training is needed for most people, after all, it takes 3 weeks and the easiest parts come first, you gradually get fitter as you go so long as you don’t try to rush.

Did we get altitude sickness?

No. Chef had it badly in Peru, so we were wary, but we had no problems at all this time, you ascend slowly on the Annapurna Circuit Trek and can stop at any point for extra acclimatisation. The altitude does, obviously take its toll, breathing is very hard. We didn’t take Diamox, I don’t think we even knew what it was back then. Read about Diamox experiences at altitude here.

Did we see people get into trouble?

Yes, we saw people helicoptered out with altitude sickness, we saw people with frostbite. One guy damaged an ankle and couldn’t walk, he hired a pony and then fell off that, he was accident prone. Somebody else took on the pass without sun glasses, he had severe snow blindness and was in a lot of pain for a few days afterwards. There was a lot of sun and windburn, I suffered from that too, despite doing all the right things. There were people killed by an avalanche on the Annapurna Sanctuary trek while we were there.

Is the Annapurna Circuit Trek dangerous?

Yes, a bit. There were lots of precipitous drops and narrow paths that I sometimes felt may crumble, casting me into the abyss. We crossed a fresh mudslide at one point, we also saw an avalanche, from a distance. One of the villages we stayed in had been wiped out by a landslide, killing many, and then rebuilt. But is it more dangerous than crossing the road? Doubt it.

More Resources on Trekking and Nepal

And now for more gratuitous Annapurna Circuit photos, I didn’t take many, I was shooting film on a pocket camera and once we got high it was just too cold to fiddle with it, but I think there are a few good ones.

Part of The Nomadic Family’s Favourite Places in the World photo carnival.

I know the Annapurna Circuit trek has changed since we were there, the roads reach more of these villages we visited, they are no longer isolated and there must be more people and better supply routes. When we were there everything was portered up to altitude on men’s backs, you wouldn’t believe how much these guys can carry up mountains in flimsy shoes ( did you see the guy carrying the chickens?). But it can’t be spoilt, can it?  It was just too amazing to be spoilt, I’m sure many of the residents are very pleased to have the roads, we can’t begrudge them that. So, we’re back in Nepal soon, maybe before the end of the year. I can’t wait to take on the Annapurna circuit trek again. 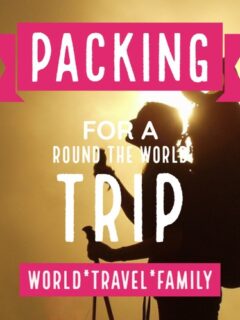 Previous
What To Pack For a Round The World Trip 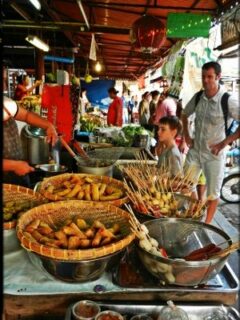 This sounds really interesting. Now I am surely going to plan a trip to Annapurna Circuit in Nepal with my friends.

The trekking to Annapurna Circuit is one of my favorites, it's such a helpful ultimate guide for all planning to go Annapurna Circuit trek. Also, one of my other favorite of this route is Manang Trek. If you have less time, then visit Manang only. I am sure that you will love it.

We might be there again just a few weeks before you Marvin. We're off to Everest again next month, then, if I can talk the kids into it, I'd love to get up around Annapurna again. Enjoy!

Excellent place for trekking! Loved the pictures you provided, Alyson!

Ps. I loved the video and all the photographs. Truly wonderful!