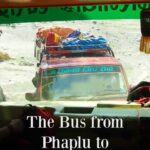 I posted already about the various ways of getting to and from Lukla from Kathmandu, Nepal. Flying into Lukla isn’t the only way to start  your Everest region or Everest Base Camp trek, there are various bus, jeep and walk options. We feel that flying is the best way to go based on our experience, because we’ve done it 2 ways. We flew into Lukla to start our Everest trek and at the end, walked out as far as Phaplu before catching the bus to Kathmandu. Taking this option also gave us a chance to check out the jeeps that ferry trekkers in and out along the same road. The bus from Phaplu to Kathmandu was quite an experience!

My personal Facebook friends had a treat on the day we took the bus from Phaplu to Kathmandu, I was live posting the whole way, sharing the highs and lows of this intense, terrifying, monumental journey. It was a day I’ll never forget and I think I should share those thoughts, experiences and images here with you.

Sorry about photo quality, many of these were taken sneakily on my phone.

Bus or Jeep from Phaplu to Kathmandu?

We chose the bus because it was cheaper ( around $12 each) and, we hoped, safer than the jeeps. Generally with transport on twisting mountain roads there are problems with motion sickness and the smaller the vehicle, for us, the worse the sickness. We’d read that passengers are crammed in like sardines in the jeeps and that there were often long delays. One of my children hates being squashed in next to strangers, so for us bus is better. We were pleased that we chose the bus after passing the convoys of jeeps on the road and seeing them overtaking. Obviously, we won’t know for sure which is better until we’ve tried both ways.

The Walk from Lukla to Phaplu

We wanted to extend our trek and although walking out would appear to cost less that flying, it’s actually more expensive, but we got more days in the mountains for our dollar. This part of the trek was very different to everything above Lukla for many reasons. It had some incredible highlights, but overall I wouldn’t necessarily recommend it. The walk takes 3 to 4 days and is very up-down, it’s by no means a gradual ascent. I’ll post more about why we’d prefer to fly and what this part of the trek was like, soon.

The Bus from Phaplu to Kathmandu. Our Experience

Plenty of comfortable empty seats with good leg room available as we boarded our bus, just before dawn, in Phaplu. We had booked the seats the night before on arrival in Phaplu after trekking in from Lukla. The bus was as you’d expect, old battered, but solid. It promised wi-fi but delivered none. We had Nepalese SIM cards in our phones and incredibly, I had a reasonable connection all day. For most of the trek we’d been connected by phone right up through Namche and Tengboche. As we left Phaplu the bus was half empty.

Bouncing downhill in the dawn light was OK. We could handle this.

We were travelling just after the end of the fuel embargo in Nepal so putting gas in a bus on such a long journey was going to be an issue. We discovered after 20 minutes how refuelling worked in the mountains. We ground to a halt in a seemingly deserted siding while our young driver and his henchman jumped off. This was where we picked up the fuel. Our driver also took the opportunity to have a cigarette break while he was busy topping up the tank.

Bus fully fuelled and no explosion later, he stacked the bus with fuel canisters for the rest of the journey. As you can see below, none really had what you’d call a lid.

At this point a group of Nepalese workers also boarded along with their baggage. You can see that baggage below.

These gas canisters, below, despite attempts to wedge them in with rocks, slid and slipped up and down the bus for the whole journey. I wedged my foot in the way to stop them hitting the metal step. I was thinking sparks, gas, fuel, you get the picture.

So on we went. Our bus was full of local people young and old, workers and trekkers, a mixed bunch with one thing in common, just about everyone on that bus vomited at some point during the day. By some miracle we escaped. I’d dosed the kids with motion sickness tablets and they snoozed and read the day away quite happily, intermittently marvelling at the incredible views, impossible roads and other wonders before them.

There were plenty of rest and refuelling stops along with shops to buy drinks, snacks and sick bags.

I should mention, really, I must, that the roads were terrifying. If you’ve taken the bus from Pokhara to Kathmandu and thought that was hair-raising, well, you just wouldn’t believe how much worse this journey is. The road, until you get closer to Kathmandu, is single lane and cut into the side of the mountains. There is little tarmac. There are drops of hundreds, even thousands of feet to one side and there is never any sort of safety barrier. In places land slides have taken out the road, the bus just carries on, leaning alarmingly towards the abyss. I won’t say any more. I just can’t describe how terrifying this ride was in places. I’m scared of heights, very scared, I also have children, these two things put my anxiety levels through the roof. You may handle this journey far better than I did.

The driver’s sidekick has several important roles. Firstly, obviously, somebody has to light the driver’s cigarette as he refuels the bus, but our man also collects money and hands out tickets. He was so superbly practiced at this that when the bus was totally full with seated, standing, crouching, leaning and perching passengers, he could walk to the back of the bus along seat backs and arms to collect his dues. His third role, the most important, was to keep us on the road rather than in the valley a thousand feet below.

When the road got particularly narrow he would lean out of the door to check the wheels were actually on solid ground, conveying his observations to the driver in a series of well practices whistles and bangs. It’s a polished team that spends a full lifetime driving in the Himalayas.

Ok, so this bus journey was a little testing. It’s also an incredible memory and memories like these are the stuff that makes our family bond tighter and filled with humour. It was a day I wouldn’t swap, but it had its moments. We adore Nepal, so much so that we’re thinking of living there for a while, so if you want more from the mountains, watch this space!

If you enjoyed reading about this bus ride in Nepal you’re possibly planning your own trip to the Himalayas, we have heaps of other information here for you, including:

Gear for Trekking and Nepal

Thank you for the wonderfully useful write-up on your trip.

I am currently looking into flying in to Lukla and then bus/jeep back to Kathmandu (with the Everest Panorama Trek in between). Like you, a family of four with two kids. Ways of cutting cost is in the progress of being explored.

You mentioned that it is actually more expensive to walk out than fly out. Why? How so? Greatly appreciate if you can enlighten me on that.

We were with a guide, so that was $20 a day straight up. Then accommodation, food - food is expensive, although dramatically less so that on the main Everest tourist highway. In some places below Lukla you'll be back to the old system of free stays if you buy dinner - that's cheap. Just an extra 4-5 days of trekking and food for four people is more expensive than the flights. Then add cost of the bus. It certainly does cost more, but you get all those extra days on the mountain. We did this route for a second time recently and enjoyed it far more than first time, but we flew to Phaplu. Avoided that bus ride.

Hi Alyson, Iam planning to travel by bus during October from phaplu to Kathmandu. At what time will it reach Kathmandu ? Thanks.

Probably early evening Ravi, after dark, but a lot depends on traffic in the outskirts of Kathmandu, it took us hours to get into town. It generally does, same applies on the Pokhara buses.

Hello! I met you a couple of weeks ago, I was coming down from Jubing as you were climbing up - we had a chat about the Cho La, which I hated as I also have no head for heights! I hope you've had a great time on your trek. We're just about recovered and getting ready to head to Pokhara for more trekking. If you're trekking back out to Paphlu or Salleri, you can get a whole jeep by buying all 9 seats - we paid 11700 NPR at Laxmi guesthouse in Salleri. You can spread out and get the driver to stop whenever you want. Just make sure that the driver doesn't try to pick up extra passengers - point out that it's a private jeep if he tries it (ours did). Karen

I remember! Hello . We got back yesterday, 21 days up there. Loved it, and it was hard, of course, but magical. Lots of posts to come! Enjoy the rest of your time in Nepal. We're off to Chitwan and Tibet, plus more!

Hi there and thanks for the post! Do you know where these busses arrive/leave in Kathmandu?

omg nepal sounds amazing, but i would have definitely freaked out if the tyres was already off road whoa. the closest to this kind of road trip i've been on was from srinagar to ladakh, and that was by jeep. but it was definitely memorable for me! hoping for more stories for you as my lessons before gearing for my nepal trip next year! thank you alison!

We arrive in about a week, so lots more to come, but I'll be offline a lot in the Himalayas, not sure I'll get much done. But you have a great trip!