Fear and Panic on the Everest Trek. Scary Bridges!

I’ve posted already about how much we loved the experience of trekking in Nepal’s Everest region, so don’t take what I’m about to say the wrong way. Just because I was scared half to death regularly and frequently by the scariest of scary bridges ( and the odd path with precipitous drops, mud slides and general precariousness) and just because I *may* have been reduced to tears once or twice (or three times), doesn’t mean I wasn’t having a good time. I love the mountains with a passion and I’ll be back in the Himalayas just as soon as I can, but that doesn’t mean it’s easy. Sometimes it’s scary.

My dear husband decided to capture my reaction the highest, worst, most terrifying of the scary suspension bridges in the Everest region. Just to clarify, this time we were on the Everest Base Camp trek but turned back just 2 days before Base Camp, we didn’t think it fair to take the kids any higher at just 9 and 11, so we did some lower side treks instead. That, and we didn’t have much by way of gear, hitting the serious snow in just running shoes didn’t seem so smart. Our kids made it to Base Camp 2 years later.

So if you’re heading to Everest Base Camp, or trekking in the Everest region generally, these are the bridges you will be crossing. There are several and I’ll save the worst, and the video of me mildly losing it, for the end of the post. Would you save this to Pinterest for us? Just hover and click.

Suspension Bridges on The Everest Base Camp Trek

The bridge below was on day 1, as we descended from Lukla airport. As if the flight to Lukla wasn’t hair-raising enough. I coped petty well with this one, better than I managed on the Annapurna circuit 16 years ago. My fear of heights may have diminished with age.

I’m scared of heights, really scared. I also suffer from anxiety, particularly where there is potential for my kids to plummet to their death in the meltwaters of the Khumbu Icefall, so yes, I freak out maybe more than most. But I never let it stop me. To me, getting up those mountains is worth all the stresses and strains of the journey times 10 million, so I just get on with it. Here are some pictures of our favourite scary bridges from our Everest trek.

We’ve done some research and as far as we can see the bridge before Namche Bazaar, is named The Hillary Bridge after Sir Edmund Hillary. It is marked on Google Maps as such. I’ve crossed this bridge 4 times now and never seen it named, but we believe this is it.

There are two bridges here, the lower bridge is the old bridge and it’s closed. The higher one is the one you’ll cross today. According to the only information we can find, it is 125m high. We can’t say if that’s correct as very little information exists. We believe the higher bridge was constructed in 2013. We crossed it in 2016 and 2018, both ways. The bridge spans the Dudh Koshi River and is the final bridge before Namche Bazaar.

Just above Namche you will find The Hillary School at Khumjung and the Hillary Memorial Chortens. There is a lovely statue of Sir Edmund at the school and one of Tenzing Norgay at the Everest view lookout just above Namche. You’ll find more information in our Namche Bazaar post.

So here’s the video my husband took of me being pathetic. It won’t win any Oscars but might give you a good laugh 😉

I react to fear by trying to organise everyone, so it’s ” Everyone Focus!” and ” No chattering, pay attention!” and “Chef FFS stop bouncing the bridge!” Yes, they bounce, with every step. And SOME people don’t give a flying one about those of us who may be terrified. You’ll also notice my deathly grip on the hand-rail.

Sorry it’s poor quality, he only had his phone, but you can see how high it was.

So would you do it? Could you do it? Are you just itching to do it? We’re heading to Everest Base Camp again soon. If you see anyone sobbing, it will be me.

You might also like the post about the terrifying flight to Luka airport, or the even more terrifying bus ride from Phaplu to Kathmandu, if you feel the flight is too scary. I’m such a wimp. See our other Nepal content in the related posts section, bottom of the page. 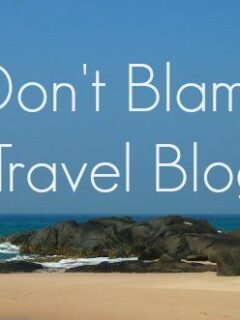 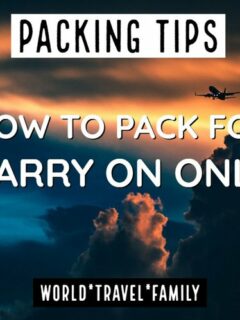 Next
How to Travel With Carry On Only
Click here to cancel reply.

We did this trek in 2013 .... I didn't realise I was scared of going over the bridges until I had already crossed 2 of them. I was coming up to the 3rd one and had a full blown panic attack ... full on sobbing and shaking. My partner had to make sure the bridge was clear and then he took me over, holding my hand ... I had my eyes shut. By the end of the trek I had overcome my fear. We are going back in March 2022 all being well.

I'm the same, but the pull of the mountain is stronger than the terror. I find chocolate and singing help a lot. Have a great trip!

Great job on the trek. I too have a terrifying fear of heights but would really like to plan to do the EBC hike as my "retirement trip', but am hesitant to consider it due to the bridges. Just wondering -- for the Namche Bazaar bridge that has the high & low route, can you actually still take the lower bridge if you ask the guide to go that way ? Any little bit of height reduction would help....

Let me know any thoughts you have on that..

No it's closed. Sorry! You don't need a guide either. It's a very well worn path, just follow your nose. Or maps are good too, pick one up in Kathmandu for a dollar or two. Honestly, you will never meet somebody more terrified of bridges than me. If I can do it I'm sure you can. Sometimes I'll sit and wait forever to be sure there will be no other people, yaks , cows or donkeys on a bridge, but I get across. The more you do the easier it gets. By the time you get back to that high bridge after hitting Base Camp you'll be skipping over it. But don't do the Gokyo Lakes trek, I've been warned off that one by a guide who is a friend, he said it's very, very scary, precipitous drops from a narrow path. There is a small section like that on the way up to the main EBC path from Phaplu, but if you walk from Lukla you miss it.

Wow! you are so brave to just go ahead and do this anyway.

I liked your article as I felt the same way when we trekked AC. I held onto the rails while crossing a bridge and always went half frozen when encountering a narrow trail or drop off. I thought I was alone, always asked if I'm the only scared one crossing this bridges... I had fun even if its also hard to breathe and I will go back to do EBC. Thanks for sharing.

This will be me.. I'm doing the trek soon and not looking forward to the bridges, but you can't let irrational fears dictate your life. So like you I shall grit my teeth and pass over them as quickly as possible, and feel the pride in myself when I make it to EBC. At least I don't have to worry about the children, your stomach must have been churning. Well done!

Love that I can share this with the world and make people like you and I not feel quite so alone. Have a great trek! We'll be there again in autumn now.