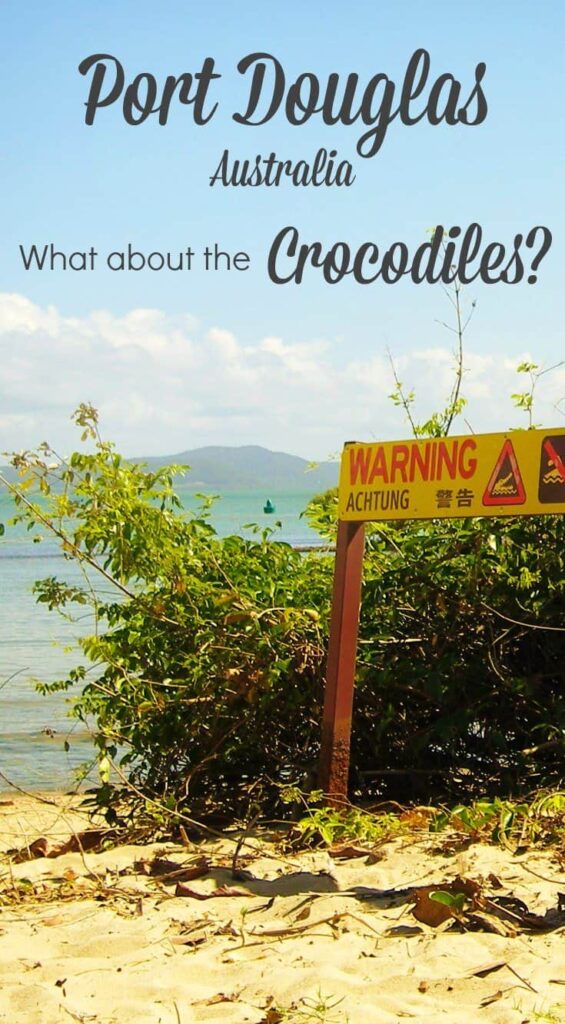 Four Mile Beach, Port Douglas, was closed a while ago by a 4-meter saltwater crocodile. He didn’t do much, just swam along the beach about 20m from shore. A crowd gathered and watched, that’s about as exciting as the day got.  It made me think though, not many people have the experience of sharing their home with these prehistoric giants. The crocodiles here in Port Douglas and Far North Queensland are pretty cool. We consider it a privilege to live alongside these amazing creatures.

Are there crocodiles in Port Douglas? Yes, they are saltwater crocodiles, the dangerous kind, and yes they can very occasionally be found on Four Mile Beach, but is there really any danger involved in swimming in or around Port Douglas?

We see saltwater crocodiles in the wild in the Port Douglas area all the time, they are there in the rivers, lakes, and some streams. We all know about them and yet thousands of tourists and locals swim safely at the beach all year round.

Is it safe? After all, they are Salt Water crocodiles, there’s a bit of a clue in the name there.

Get the TNQ “Bible” direct from its Australian creators. No third-party sellers, a direct link to the publishers in Australia. NSW published, QLD created, sold by us to help you find the hidden gems of Queensland. A beautiful book, glove-box, or handbag sized to take with you as you explore our part of the world. Cut out the middlemen and support Covid-hit creatives directly here.

Port Douglas Crocodiles, Salt Water or Fresh Water, Where to See Them?

We have salties in Far North Queensland, the big, vicious, aggressive kind. Australia’s fresh water crocodiles are a walk in the park compared to our local crocodilians.

There are quite a few around, but after visiting the Northern Territory I got the impression that we have far fewer than the NT. Crocodile density up there seemed many factors higher.

If you want to see our local crocodiles from a safe distance, check out the following options.

Check out our post on Crocodile Spotting in Port Douglas Here. Or, if you’d like to view all tours and activities available in Port Douglas (and nearby), from reef trips, to SUP, to tours of The Wildlife Habitat, this site gives you brilliant ideas.

We have a playlist below featuring Port Douglas, Cairns, and local attractions. My kids run our video department, if you let them play, they get every cent the videos earn. I hope you do!

Nobody has been hurt or attacked while swimming at Four Mile Beach in the 5 years I lived there. There was an attack here in 2001, the girl escaped with injuries. I have seen them at the southern end of the beach a couple of times, but they just swim past, minding their own business

A few years ago, a lady was taking an early morning swim, south of here. It was stinger season, so she wisely chose to swim in the stinger net. As she approached the far end of the net she realized that what she thought was a log was, in fact, a large reptile. I think she got out of there pretty fast, unhurt.

Sadly, there have been 2 crocodile related fatalities in Far North Queensland in the last 10+ years that I know of, both involved people venturing into rivers that are full of crocs.

There are a couple of great golf courses in Port Douglas, both have water features, both have crocs. I’m sure it takes quite a few golfers by surprise to find the 18th hole obstructed by a large salt water crocodile, but for us, it’s normality.

We often used to take the children for a ride around one of the golf courses to see if we could spot one. It’s rather like my parents taking me for a drive to spot rabbits when I was little, only bigger.

There was (maybe still is) a croc at a country club here, a popular wedding venue. He sometimes starred in people’s photos of the big day, my husband worked there, he saw him often.

I know a local electrician who once went to work at an empty property to find a small croc in the swimming pool. That’s rare. I don’t know why it doesn’t happen so much here, you hear about alligators in Florida doing that all the time. All pools have to be fenced here, by law, maybe that keeps them out.

Occasionally, in the wet season when we have some flooding you’ll find a small one strolling down the road, but again, it’s rare. I believe one was found in somebody’s garage once.

I have one slightly scary tale to tell. A good friend was living right on the beach south of Port Douglas. It was Oak Beach. She built a rope swing so that her son and his friends could swing from the coconut palm and plop into the water at high tide. The boys were delighted and spent the afternoon playing and enjoying the new toy.

The next day she went down to the beach and found a very large croc partially submerged, right under the swing. Crocodiles are very clever you see, they watch, wait and learn.

That’s basically all I have to say about our Port Douglas crocodiles. I rather like them, they are a great source of tourist revenue, but you have to be sensible. They have been fully protected in Queensland since 1974 so their numbers are increasing and they are here to stay. I keep the children well away from the banks of any lake or river and exercise caution at the beach. We swim in the sea regularly, but I prefer to save it for the days when the water is crystal clear. You should be perfectly safe on the Great Barrier Reef, but they have been spotted around some of the reef islands.

Salt water crocodile isn’t so nice to eat, by the way, it’s farmed for meat and skins, try it, but I wouldn’t recommend it. You may see crocodile pie, crocodile sausages, or smoked crocodile up here.

If you want to try crocodile Mocka’s pies had a crocodile pie the last time I visited. Crocodile tastes like fishy, soft, chicken.

The best way to avoid the crocs is, obviously, to swim safely in a swimming pool. The beach should be fine, don’t be put off, and you really should come up here to check out our wildlife. It’s quite amazing,

Below are a selection of some of the best hotels with pools in Port, each with a swimming pool way above average. We have some outstanding hotels and pools in Port, they’re well worth spending maybe a little more on.

No-swimming signs have appeared at Mossman Gorge recently. You’ll have to check that out for yourself.

Swimming with saltwater crocodiles is generally a very bad idea, but in Port Douglas you can now get in the water with the salties at the Wildlife Habitat. Darwin has a similar saltwater crocodile swimming attraction. They tell me it’s safe.

People will tell you that there are no saltwater crocodiles on The Great Barrier Reef. It’s too far from land. However, I have seen video of a very small crocodile out on the reef. It was there, near one of the snorkelling pontoons. It was a small, young saltie, not big enough to be much danger and was likely disorientated and washed out to sea in storms. The person who took the video was a dive instructor, he was in my home, this is not an urban myth!

Despite the incredibly small number of crocodile encounters, Port Douglas and Far North Queensland are immensely beautiful. There are plenty of gorgeous beaches for relaxing and there are also many restaurants in the area serving seafood and tropical fare. It’s an excellent spot to vacation, and you’ll find that you won’t soon run out of fun things to do.

Great 🤦‍♀️I’m now regretting booking our family holiday to Cairns and Port Douglas: Our resort in cairns has a decent pool but We planned On swimming at Josephine and Millaa waterfalls? I can’t find anything saying crocs there BUT Also for Port Douglas we are staying at “by the sea” they only have a small pool but the selling point is a few minutes walk to the 4 mile beach patrolled area . We are going in June now not only am I petrified of crocs coming there as well as the Jelly fish ☹️ we do plan on swimming at Mossman gorge . It’s too late to change or cancel flights ☹️Now I wish we had just booked so where else . Thanks

June is not stinger season. The nets won't be on the beach, stinger season is only summer. Most of the local swimming holes are almost guaranteed croc free (it can never be 100%) but people, tourists and locals, swim with no issues at the beach and in swimming holes year-round. Josephine falls is also up on the Tablelands, both are quite a way from either Cairns or Port Douglas. There are heaps of beaches from North of Cairns to Port Douglas Four Mile Beach where people swim. My kids swim, my husband trains for Ironman events, we're very much alive. Don't panic!

Interesting article. I have a friend who loves going to Northern Australia, and he has told me about the salt water crocodiles. How far is the Great Barrier Reef from Cairns?

About 1 and a half hours out from both Cairns and Port Douglas by boat. We just got back actually, we've been out there on a live- aboard dive / snorkel trip for the last 4 days.