Our Four Month Anniversary, Disasters and a Lesson in Unplanned Travel.

Four months ago this week I wrote about the things I’d miss as we left Port Douglas to explore the world. Just the three of us, Chef caught up with us later. I haven’t missed home at all, we’re having a brilliant adventure, but things haven’t gone quite as expected. Our unplanned travel style has come in very handy.

We had no fixed itinerary, just a one way ticket to Kuala Lumpur and some ideas about where in the world we’d like to go.

I’m very, very glad we chose unplanned travel, things haven’t always gone as we expected and our flexibility has been priceless.

We’ve done it both ways before, planned and unplanned. Our first RTW ( Round The World) had fixed points built in. We had to be at certain airports at certain times to catch flights that were part of out RTW ticket. We had a great time but it was all a bit rushed. We’re finding unplanned travel suits us much better.

So should travel be planned or unplanned? Before you decide, read about some of the changes we’ve made in only 4 months.

What we Planned and What Actually Happened.

We thought we’d use up our full 3 month visa in Malaysia.

What actually happened was a much shorter stay. We were caught up in an environmental disaster as smoke billowed over Malaysia from Sumatra. I had to abandon my trip to Malacca on health grounds just as I was about to head to the bus station with backpacks and kids. Read all about our disastrous week in Freaking Out in Malaysia.

We baled out of Malaysia early and headed for Bangkok to escape the smoke.

We thought we’d get travel vaccinations in Bangkok.

What actually happened was we didn’t stay in Bangkok long enough, it turned out to be more expensive than we expected. We did get some vaccinations in Kuala Lumpur and we’ve discovered that just about any hospital or medical centre in Asia will organise vaccinations for you.

We thought we’d take the train to Chiang Mai and meet up with friends there.

What actually happened was a long stay in Bangkok waiting for Chef to arrive. The friends cancelled their trip, that was out of our control, Chef brought his flights forward.

We thought we’d stay one month in Laos.

What actually happened was a 6 week stay. Initially we stayed longer through sickness, but then we found we liked Laos a lot and extended our visa.

We thought we’d stay a few weeks on Ko Samui, Ko Phangan and Ko Tao before going back to Chiang Mai.

What actually happened was we only managed a few days on Ko Samui, we hated it.  We like Ko Phangan so much we’re using up the rest of our 60 day Thai visa right here.

We thought we’d travel South East Asia for at least a year.

What actually happened was my mum’s health deteriorated, my brother had a family crisis and we thought we’d better head to the UK for Christmas.

This change turned out well for us, we found a great, unexpected, deal on flights to London with Sri Lankan air. Our tickets allow us a month stop over in Sri Lanka on the way. Sri Lanka is one of our favourite countries, we got married there. You an read about our Sri Lankan wedding and how it all happened, or watch a short video clip of Chef almost falling off an elephant on our wedding day below.

Yesterday, out of the blue, Chef developed an inguinal hernia. The Ko Phangan emergency clinic was excellent, they drugged him and arranged an ambulance and a ferry to the hospital on Ko Samui this morning. Luckily ( or unluckily, depending on your viewpoint), his bowel popped back into his abdomen during the night and he doesn’t need emergency surgery.

UPDATE:- It popped back out again straight away. He had emergency hernia repair surgery on Ko Samui.

But we’re left with problems. Will he still be able to carry heavy packs? Can we risk being away from medical care when the same thing could happen and become serious at any time?

At the moment we don’t know. I think our plans for next year are about to change again. 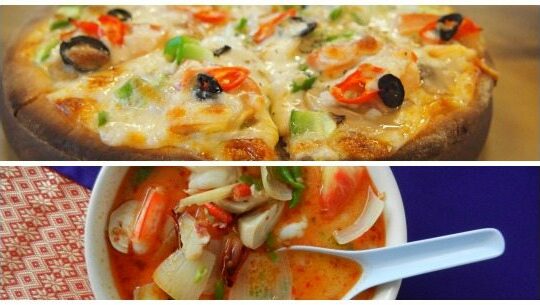 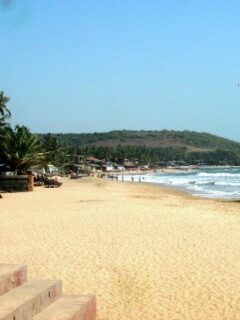 Next
Why Visit Goa (and why we'll be going back!)
Click here to cancel reply.

Alyson, The unexpected makes life more exciting. Don't plan just go. The lea sure of freedom. All apply ....Minus medical emergency. Enjoying your travels as you share the family ups and downs. Happy travels!

So happy about the surgery; yep, those are some changes of plans you've been through! Hope everything remains stable for Chef. :)

I discover your blog few days ago. I am also a traveller but not with family yet! I really enjoy reading your blog, your adventures and the way you see life even with kids. Confort me with the idea that travelling with kids (and for cheap) is possible. And love the unexepected, that make the fun (expect for the sicknes od course).

Good luck to all of you with your travels and wishing my best to the "Chef" with his health.

Half the fun of travel is dealing with the unexpected. Except for the hernia, of course - it sounds like heading for jungles with no doctors, carrying heavy packs, is not a great idea at the moment. Good luck - all of you.

Yep, we need to get the surgery ASAP Jo, I'm working on him! He can't carry his backpack with a hernia.

Well flexibility is certainly the key. ;) Keep up the great attitude. :)