I could tell you how we got from Laos to Bangkok easily on the fabulous sleeper train and how we’re now safely installed in a hotel in Bangkok, but that would be LIES!  And I’m not going to lie to you, so here’s all the icky, grumpy, boring bits of real life family travel from the last 24 hours.

1. Leaving our hotel in Vientiane.

We had to walk to the bus station because the tuk tuk drivers wanted to charge us an arm and a leg. It only took about 25 minutes but it was hot, the bags were heavy and the kids were fed up for some of the time, although there was a fair bit of laughing and joking, too.

Hot, heavy and fed up are a recurring theme here.

2. Waiting at the skanky Vientiane Bus Station for an hour.

It’s a highly skanky bus station, the fumes were horrible and it was hot. At least we had seats and shade.

Actually this bit wasn’t too bad, we played Uno and Top Trumps. We watched as a pick pocket stalked us ( and gave up) and gave the last of our kip to a mother and son beggar pair. The poor little love had lost one leg and was in the type of wheelchair we’d seen at the COPE centre a few days before. I think the boys had a wake up call seeing a child their age, maybe damaged by a cluster bomb, maybe not, we don’t know. They both gave us the most beautiful Lao smiles in return for a few thousand kip.

3. Crossing the border on the bus.

The bus was fine and we had seats, we all nodded off. The crappy part was the getting on and off, first to leave Laos, then to enter Thailand on the other side of the Mekong. Standing in queues, filling in forms, loading and offloading our baggage. It’s never fun entering and exiting countries, but it has to be done, you can’t travel without it.

4. Waiting 4 hours for the sleeper train to Bangkok.

After we’d walked a fair way with our bags to find an ATM (we needed Thai Baht and we had none), and had some lunch with a lovely German traveller named Stephan, we sat in the station for four hours. The sleeper train to Bangkok leaves at 6.20pm.

It wasn’t too bad, the kids found a huge praying mantis to make friends with and ran around playing for a while. Yet again, it was hot and there wasn’t even a fan to sit under.

The station master let us board the air-conditioned train early, that improved everybody’s outlook. There were crisps and there was beer. Result.

We love the sleeper trains, they’re comfortable, the service is great, the toilets are clean ( by train standards) and there is a sink with soap to wash your hands.

We had a really-quite-good dinner served at our seats before bed.

The only crappy part was getting the kids to sleep. I think it was 3 hours before they finally settled down. The little demons almost pushed me to the limit, they gave in when I got to “you really don’t want to make me come down from this bunk!”.

That’s real-life family travel life, nobody expected them to transform into angels once we hit the road.

Trains in Thailand are always late unless you want them to be. We really did find ourselves leaving Bangkok station at 7:11 am precisely.

Then we had the battle with the taxi drivers. Nobody at the station taxi rank wanted to use their meters, instead they’d like us to pay 300 Baht, please. We KNOW that journey should be around 50 Baht. So we walked, again, with our heavy packs, to find an honest taxi driver. Which we did.

7. Finding somewhere to stay in Bangkok.

At 7.30 am we were in Mc Donalds on the Khao San Rd having egg muffins and coffee. We thought we’d hang out there and use their aircon and wifi ‘for a while. Not many guest houses will let you check in before lunchtime.

You can’t use Mc Donalds wifi here unless you already have an account. So that was a disaster. We managed about an hour of sitting there and ” I’m bored mum” before we left to find a guest house. There’s only so much Uno I can take.

We love Bangkok but we were hot and loaded down with bags and Bangkok streets are grimy and smelly. Cat pee is the overwhelming smell around this part of Bangkok, cats pee on the road, on the pavement and even on the roof. I’ve seen them. It’s all concrete and tarmac, no open ground for them to relieve themselves, poor things.

We found a hotel eventually, we walked too far, we pushed the kids too far and we looked at too many rooms before going back to one of the first ones we saw. But we’re not perfect, we ‘re just doing our best.  650 Baht per night. A good deal, much better than our last guest house in Bangkok, we blew our budget that time.

We’re here, we’re comfortable, we all smell a lot better after a shower and we’re ready to take on the Bangkok streets again. There is loads to see and do in Bangkok and I’m excited to show the kids. Life isn’t always easy, but it’s much easier when you’re not carrying a backpack or three. 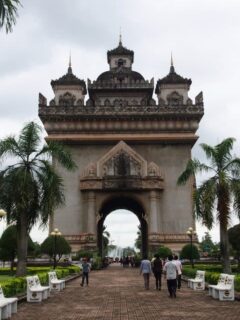 Previous
The Monster of Concrete, Vientiane

Next
Getting to Ko Samui from Bangkok and a Scam to Avoid.
Click here to cancel reply.

And you all survived! That's the part you'll remember in the long run. (At least you've written the sordid details down to remind yourselves that t wasn't all peachy and you got through it anyway.)

We love sleeper trains - sounds absolutely worth it.

Yep, you're right B, it's a memory now and a good one. You forget the hard parts really quickly. We love sleeper trains, too, particularly the kids.

Oh that night train! Like you, I love night trains - mostly. The automatic doors that open and close all by themselves. The smell of feet in the carriage.

But the train I caught from Vientiane to Bangkok screeched - each time it slowed down, or speeded up, or went round a bend. And it developed a terrible judder, so just as you were dropping off to sleep it began again, shaking and shaking until you thought all your bones would come apart. Almost enough to put me off night trains (but not quite!)

Jo, I now know exactly where you're coming from. For the first time ever I had a totally sleepless night on the sleeper train down to Ko Samui from Bangkok. Wibbly Wobbly torture!! Every other one we've ever taken has been lovely. I think the stabilisers on our carriage were broken, or something.

Definitely feel ya! Here's something we found that made life a bit easier on the road for us: only one adult go off looking for a room, ATM, etc while the other stays put with the bags and kids. Have fun in Bangkok!

Pleased to hear you got there safely and that all is well. Must try the train one time, it sounds very good really and the best part of the journey.

Alyson, this post is why I adore your blog. Real stories...not smug traveler commentary. Go easy on yourselves for a few days and enjoy Bangkok! On of my favorite cities... :-)

Us too, we love Bangkok, it's a real shock to the system after Laos though Renee!! Thanks, you're very kind. xx