COPE Vientiane is a non-profit organisation in Laos which provides prosthetic limbs, mobility assistance and rehabilitation for Lao people who can’t afford it. We took a look at their visitor centre in Vientiane, Laos’s capital, this morning. It was one of those incredible places that had me rushing home to get a post written and published straight away. If you are in Laos or Vientiane, you really must add this museum to your itinerary, it will open your minds and your hearts and with kids it’s an essential part of their travelling education.

Were you aware of any of this?

This is one type of cluster bomb, a casing containing hundreds of small bombies or bomblettes. Dropped from the air they spread to cover a large area. 80 million active bombies remained in Laos after the war.

COPE Vientiane provides around 1300 mobility devices every year, including prosthetics. They don’t only deal with amputees, they help children with congenital malformations, too.

They deserve your support.

Visit the COPE centre in Vientiane, admission is free. You can buy something from the shop or make a donation to help support them.

You can find more information about fundraising for COPE here. 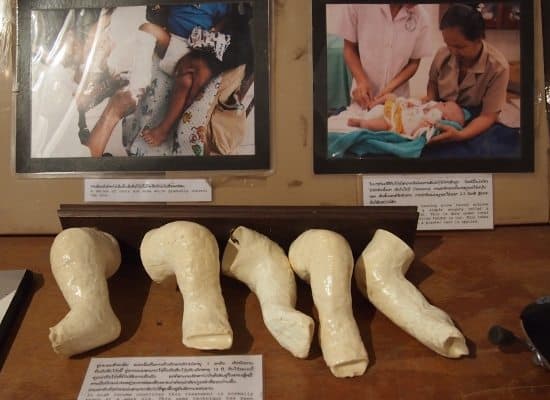 The COPE visitor centre is a small museum but a fantastic one. It’s not at all harrowing and it’s very suitable for children. They can touch, handle and try out the mobility devices on display. My children learnt a lot this morning and so did I. I’d like to thank Cope Laos for that and for their valuable work for the Lao people.

I already knew that Laos is the most bombed country per capita IN THE WORLD. We’ve seen parts of bombs used as flower pots, decorations and recycled into useful objects all over Laos. I didn’t realise that the bomb casings we saw were from cluster bombs. I didn’t ever really know what a cluster bomb was.

Most countries in the world have banned the use of cluster bombs, the United States, Israel, Russia, China, India and Pakistan haven’t. Doesn’t that say a lot? Find out more about the campaign to ban cluster bombs here.

The young man in the picture was there this morning at COPE Vientiane. He has lost his sight and his hands. He is part of the global campaign to ban cluster bombs. Please go, the cope visitor centre is fairly small and will only take up maybe half a day for you, this is one of the most educational museums we’ve ever visited and a real eye opener. Support Cope Laos in their important work for this wonderful country’s people.

Yes, yes, yes - I've talked (and written) a lot about Laos since I was there last winter - and most people don't even know where it is, let alone have any idea of the trauma people have gone through there. It's a beautiful country, and deserves better.

And the COPE centre - is painful, and humbling, and so important. Images from the film I saw come back to trouble me still

unreal what the road is giving you and your kids alyson. thank you for sharing this and for caring so much to share it with others. i'm going to share it now dear. gabi

Great post Alyson, this really is an issue worth highlighting. I remember reading about the horrific effects of cluster bombs used by the Americans in Iraq (even though their use is against Geneva conventions) - such hideous inventions. I didn't know that Laos was the most bombed country per capita though - that is really shocking. We'll be sure to visit COPE when we get to Laos in a few months.

Wow Alyson, this is amazing. Thanks so much for sharing. That picture of the cluster bombs hanging is scary! I didn't know what one was either.