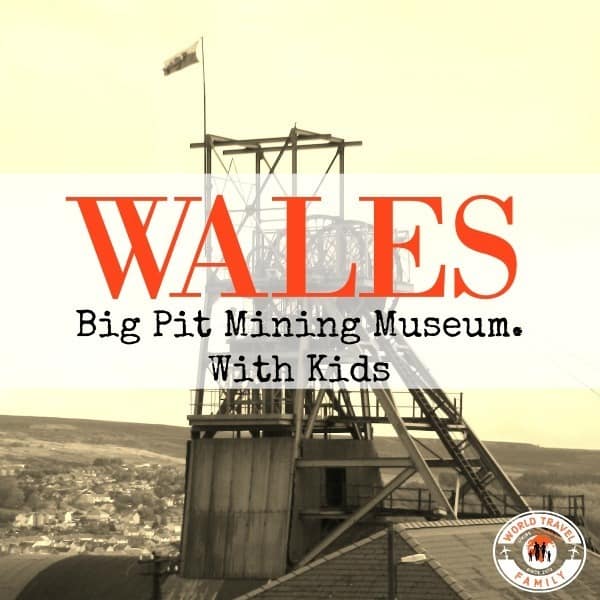 Experiences of visiting Wales and Big Pit Mining Museum with kids. My kids were pretty small back then and we had a wonderful time touring the UK and taking them to Wales in particular. What is Big Pit mining museum like? Is it good for kids? Can you take small children and how much does it cost? It was free for us when we visited and was a real highlight of Wales with kids.

My last time in Wales and the UK was my first as a tourist. I lived there for almost my whole life, now I had four weeks to show the children the bits I had always loved and maybe find some new bits, too. Touring the UK with the children, just the three of us, was brilliant. We had loads of fun. Wales or even the whole of the UK is relatively small  so we covered a lot of ground.

We had a lot of miles to cover, from Heathrow, to Cambridge and Manchester, to my parents in Wales.  Hiring a car at a good rate was the only way to go, cheaper and more convenient than trains. Having your own car gives you freedom to go anywhere, when you like and to turn up the radio and sing as loud as you can. Some days we drove from Wales to London and back again to see some amazing attraction like London Zoo or The Doctor Who Experience.

This post has more ideas on things to do in London with kids. Wales to London is about a two-hour drive, so worth it to see the kids’ faces when they came face to face with a real Dalek. It’s more economical to drive there and back than to pay for overnight accommodation in London. Sure, it cost us a bit in petrol, but a return flight from Australia to see the things we’d missed in our precious few weeks just wasn’t going to happen.

Big Pit Was an Unexpected Gem

I’m Welsh, I’ve lived in Wales  for 33 years, but I’d never been to Big Pit. I drove around the Welsh Valleys, showing the boys the sheep and the mountains.

“What are all those lines and squares Mum?”

We happened across the Big Pit mining museum and stopped to check it out.

As Homeschool field trips go, Big Pit is right up there with The Kennedy Space Centre.

One of the most fantastic things about Big Pit, and there are many, is that it’s FREE! I’m a budget traveller, so anything free, particularly if it’s great for the kids, is a winner, but this place was outstanding, fantastic and excellent. Want to see more?

Obviously, it’s not just for the homeschoolers, anyone would enjoy this, so long as you don’t suffer from claustrophobia or any fear of being deep underground in a disused mine, for that is what it is, an actual coal mine turned tourist attraction. Doesn’t sound much does it? But it’s brilliant!

We were all equiped with helmets and head lights and told to leave anything electrical at the surface. Including cameras and car keys. It’s a REAL mine, they’re worried about gas and sparks and all that stuff,  it means I’ve no photos from down the pit, unfortunately.

The men helping us get kitted out and guiding us were all real ex-miners and they were gorgeous, beautiful accents and so much to tell us. They talked about the history of the mine, how the little children used to sit in the dark and the cold opening and closing doors all day, took us to the underground stables where the pit ponies lived and showed us the cramped coal faces where men would work by hand, bent double under the low roof.

When we came back to the surface we explored to pit head baths and discovered that the miners’ wives were the real heroes in those days. Before those baths opened their men would return black, in body and in clothes, everything would be scrubbed to get the coal dust out, every night, by hand with water boiled in a kettle, they were tough in those days. Once the baths opened they only had the clothes to worry about.

There were re-creations of miners homes and a mine simulation with modern mining technology. The boys adored it and learned loads. Fossil fuels and non renewable resources are very much on the Australian curriculum, we had the best lesson possible at Big Pit that day.

So if you’re in the UK and you’ve got a car, maybe head over to the South Wales valleys and give Big Pit a go. There is loads more to do around there, my home. We were really pleased we went. Hope you can get there.

Wow, that looks like an incredible trip! I have learned about mining history here in the US, but there's nothing like seeing a place first hand to understand what people really went through. Thanks for sharing at the Culture Swapper!

My secondary school took us here, it was great! Still remember at least 15 years ago. Although I have to say you're lucky to get to London in 2 hours, depending on where you go in London it can take 3 hours from Bristol! I suppose if the road's clear and you're heading to West London then you can manage it (from the Welsh border anyway). Pwll Mawr - great place!

Isn't it just Andrew! It was such a great surprise. Yep, 2 hours, door to door, from my Mum's in Newport to Twickenham or Richmond, where we used to live. We'd take the train in from there. No point in paying for parking AND the congestion charge.

Have been to the pit museum in wakefield but not in Wales. Will check it out if we go nearby. Free is my favourite too ;)

I think they were 5 and 7 Suzi, I don't think there was a minimum age. I had to keep a close eye on them and hold onto them a bit, but the ex-miners were so great with them that they hung around and listened to what they were saying.

I was loving how you had two kids in the car, solo, driving all over. :) I have a 5.5 yr old and a 14 mos old -- so I'm ready for the smaller to get a little older before attempting. But, honestly, I just love that you did that.

That looks wonderful. How old we're the boys at the time?