What Makes Paronella Park so Good? 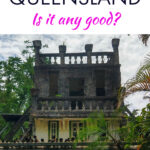 Paronella Park is a tourist attraction in Far North Queensland, Australia. It was built as a pleasure park business by an inspired Spaniard with a head full of dreams, back in the days when this part of the world was inaccessible to most. The story of the park gives it a unique appeal.

It has won TripAdvisor awards for being one of the best attractions in the world, not just in Australia, which seemed a little odd. It looks, from the online photos, like the closest thing Australia has to a stately home or castle, complete with landscaped grounds but with a typical rainforest jungle setting rather than the temperate lawns of Europe.

It comes complete with a before-its-time hydroelectric generating setup that still provides power today. The falls setting is picturesque but has brought extensive flooding over the years.

We’ve owned a house in FNQ for over a decade and seen most things there are to see in the region, most of them many times, but never been to Paronella Park. We finally went, and it really was good, a very interesting place to visit, but not for conventional reasons. What makes Paronella Park so interesting? It’s the story behind it.

Paronella Park is a tourist attraction in Far North Queensland Australia. It’s easily accessible from the coast road and from the inland Tablelands routs along the east coast. The park is not too far from other notable places, such as Mission Beach. Tully, and Ravenshoe.

There is an entry fee and it’s not cheap. The high cost of admission was one of the reasons we’d never visited before. We managed to get a family ticket and had to just scrape one of the kids in a child. It cost us $142 Au for 4 people.

Your ticket includes a guided tour and you absolutely should take up this offer. This is what makes the park, the stories behind it. There is an after-dark light show too, but most visitors won’t be able to stick around for that. Your visit will probably take between two hours and half a day.

Paronella Park is a folly built by a Spanish imigrant to Australia, Jose Paronella. Jose was obviously a dreamer, a good businessmen, and a hard worker. He created his castle in the rainforest to draw daytrippers and to be a venue for all manner of pleasures. The park was also his family home. He must have been an incredible man.

Jose purchased this piece of land on the banks of Mena Creek in 1929, for just 120 UK pounds. The park opened to the public in 1935. I won’t tell you all the stories here, because it will spoil your visit if you ever make it to the park. We found them fascinated, even my teenaged boys enjoyed this visit although the heat was a bit much for them. We visited in October, my birthday, mid-spring in Tropical North Queensland.

The park has fallen into ruins over the years through flooding, cyclones, old age, fire, and weak construction. It was closed to the public in 1979 after a devastating fire. The current owners bought Paronella Park in 1983 and are doing their best to maintain it as a stand-alone tourist destination and caravan park. They seem to be very successful judging by the number of awards the park has received.

If you’re a gardener (as I am, want to see my gardening Instagram?) or just interested in tropical plants, there’s plenty to see in the grounds or gardens of Paronella Park. It’s like its own, mini, botanical gardens and old Jose planted 7,000 or so trees here before his death in 1948.

Don’t expect well-manicured beds and borders, everything is still very jungle, but there is a huge collection of plants with demarkated areas for ferns, palms and bamboos. We picked up a plant guide at the front desk and used numbers around the park to identify species.

Mena Creek has been the making and, at times, the undoing of Paronella Park. It has seen devastating flooding in tropical wet season. The hydro electric power generated here is impressive. The system was completely restored in 2009 and is fully functional. Jose first commissioned this plant in 1933. It was the first of its kind in North Queensland.

Visitors used to swim here in this waterfall pool but there have been crocodiles found here from time to time. So maybe it’s best not to swim. Content yourself with feeding the fish and turtles instead. You get a serve of fish food at reception and thankfully, they reuse the plastic containers. That was good to see.

None of the buildings at Paronella Park, except Jose’s cottage, are well preserved, most are crumbling. However, the exteriors and their stories are no-less fascinating for that.

The wishing-well and parts of the old ice cream shop still stand, along with changing rooms for male and female bathers and various castle-like pavillions. The tunnel of love is still there, but it belongs to bats now. Some of the stairways, balustrades, and picnic tables, all made from concrete, are original, others parts are repaired or replicas.

The major downfall of the park was the materials Jose used. Concrete, river sand, and old railway ties didn’t make for a sturdy structure in tropical conditions. Don’t be put off by the crumbling appearance, the ambiance and quirkiness of this Queensland destination make it very much worth investigating.

Other Famous Follies Around the World

Follies are often so interesting, don’t you think? One that jumps out for us is Castell Coch in Wales. It’s a fairytale castle and once upon a time, I got married there. Another is Kelly’s Castle in Malaysia. We’ve visited but I haven’t posted about it yet. Can you think of any more? I don’t know if Paronella Park is Australia’s only castle-style folly, but I’m going to find out.

We loved visiting Paronella Park and this whole short break. We took a two-day trip, staying one night at a beautiful Airbnb beach cottage (below) at Mission Beach and visiting many natural and man-made attractions on the Atherton Tablelands. We’ll post more about these soon. We hired a car and drove down from Port Douglas, to Cairns, before looping inland and up to the cooler climates and waterfalls of the North Queensland interior. Mission Beach, on this trip, was where I saw a shark feeding just a foot or two from the water’s edge. Those photos are on our Instagram account. It’s great to getaway. A short break or staycation lifted our spirits after long months of lockdown. We hope you managed to go somewhere interesting in 2020 too.

We hope you found our review of Paronella Park interesting. Our reviews are always unbiased, we’re very rarely paid to review and we didn’t go after a press pass. We visited for my birthday because it was what I wanted to do, this wasn’t work. Of course, we are us, and you are you, but we tell our truth. Is Paronella Park a good place to visit with small kids? Maybe, but they’ll have to stand around and listen in the heat for quite a long time if parents want to hear the stories. Happy and safe future travels to you all. Let’s hope we can all get back to normal soon. Please could you save to Pinterest to help build your Tropical North Queensland Itinerary. 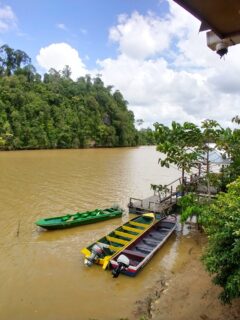 Alyson is the creator of World Travel Family travel blog and is a full-time traveller, blogger and travel writer. A lifetime of wanderlust and now over 7 years on the road, 50+ countries allowed the creation of this website, for you. She has a BSc and worked in pathology before entering the travel arena and creating this website. World Travel Family Travel Blog has been helping you travel more, better and further since 2012, when Alyson and James first had this life changing idea. On this site you can find endless travel information, tips and guides plus how to travel, how to fund travel and how to start your own travel blog.

World Travel Family travel blog is a huge global travel resource. We cover over 50 countries and to make this world travel site we did a lot of research, we travelled full-time for 6 years. We are family owned and operated, covering travel with kids, vacations, long-term travel, gap years, adventure travel, budget, luxury, group tours, and more challenging destinations. We even have a post on how to travel for free. Use the search box, categories, destinations page or menu items to find what you need. Find more travel inspiration and information on our social media.