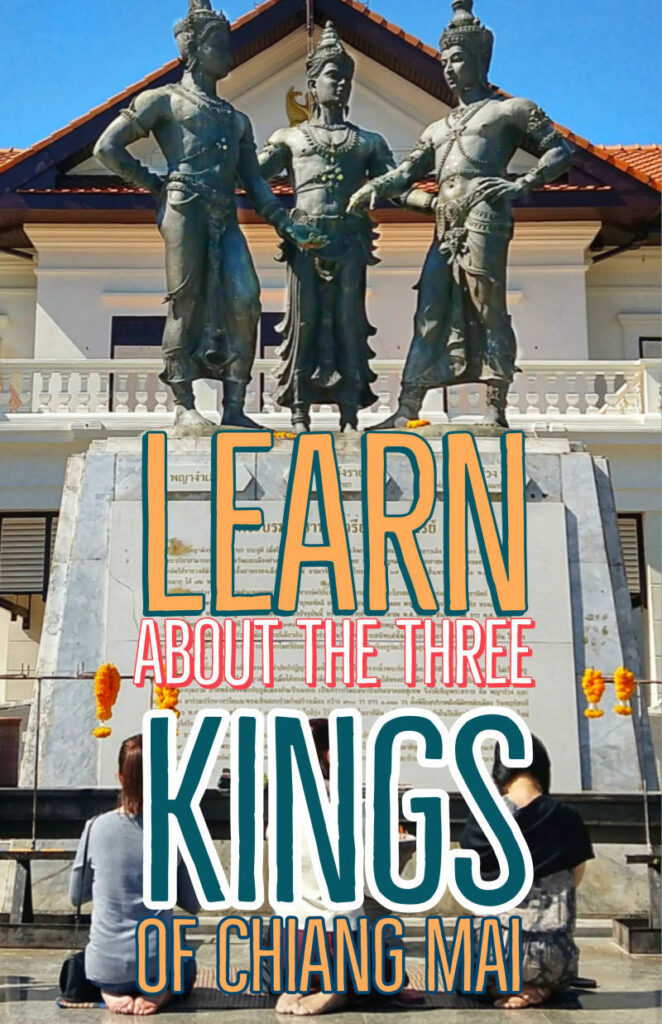 I was interested in the statue, the history behind it and its cultural significance so I did some digging and constructed this masterpiece. As we travelled around Thailand we saw more statues of these famous kings, visited their ancient cities and delved deeper into Thai history.

This post was written by D, then age 14 as an essay and history project, plus an exercise in how to write travel blog posts. Today he is sitting History A Level.

Three Kings Monument Square was made in 1984 as a tribute to the three founders of Chiang Mai. The statue itself is made of bronze and is located in front of Chiang Mai Cultural Center.

Chiang Mai was Founded by King Mengrai in 1296 and fell to the Burmese in 1558 without them even putting up a fight. Multiple wars were fought back and forth to recapture Chiang Mai but it wasn’t until 1774 when Chao Kawila of Lampang and Phraya Chaban of Chiang Mai sided with the Siamese That the Burmese lost control of the city.

Chiang Mai’s ancient walls were made the same year as the city itself in 1296 and were designed to appease divine spirits.

Wat Chiang Man is Chiang Mai’s oldest temple, it was made in 1296 the same time as the founding of the city itself. The elephant chedi below contains a hair of the Buddha.

Doi Suthep and the White Elephant

There is a legend that explains the construction of the temple, called the White Elephant Legend. In the legend a monk from the Sukhothai Kingdom was visited in a dream and told to come to Pang Cha in search of a relic. Upon reaching Pang Cha the monk found a shoulder bone with anomalous properties including glowing and vanishing. The bone was considered to be that of the original Buddha, Siddartha Gautama.

If you are interested in Siddartha Gautama, Lord Buddha. I have been to his birth place and you can read about that here in our Lumbini Nepal post.

When the monk returned to  King Dhammaraja the ruler of Sukhothai the King Declared a Ceremony and made offerings but the Bone did not display any of its abilities and the King let the monk keep it. King Nu Naone of  Lan Na heard of the bone and instructed the monk to bring it to him, once the monk reached the king the bone snapped in two.

One piece was entombed at Wat Suan Dok (also in Chiang Mai) while the other was placed upon the back of a white elephant that was sent into the forest. the elephant climbed Doi Suthep and once it had reached the mountains peak it trumpeted three times and fell dead. The king took the hint and commanded the erection of a temple at the spot. This is the Doi Suthep Temple.

Lampnag today is the third largest town in northern Thailand and is capital of Lampang Province and Lampang District. Lampang was part of Hariphunchai Kingdom.

The Lanna Kingdom, also known as the Kingdom of a Million Rice Fields was located in northern Thailand from the 1200s all the way through to the 1700s (13th century to 18th century). It was an Indianised State, this meaning that it was heavily influenced by Indian culture and religion. The capital was moved around a lot by King Mengrai. Chiang Rai was made capital in 1262 later. Later in 1296 King Mengrai changed the capital to Chiang Mai.

Phayao Province is one of northern Thailand’s Provinces today and was founded in 1096 as a small city state kingdom. In the 1200 s Phayao became important enough to gain equality with the Lanna Kingdom as well as Sukhothai Kingdom.

Phayao was conquered in 1338 to become part of Lannathai. While the Burmese held dominion over Lannathai, Phayao City was deserted. Then during 1897 Phayoa was added to Chiang Rai province. After 1977 Phayao became its own province and separated from Chiang Rai.

Today Phayao Lake is famous for its submerged temple. This temple was built in 1476 and submerged with the creation of the artificial lake in 1939, the temple itself is called Wat Tilok Aram. We visited Phayao Lake on our northern Thailand road trip.

The old city itself was in north-central Thailand and the kingdom lasted from around 1238 to 1438. After King Ramkhamhaeng died the kingdom gradually lost its power and was assimilated into the Ayutthaya Kingdom. We have a post on visiting Sukhothai  ( 2 casual links  *COUGH COUGH*)

Ruler of Lanna and founded Chiang Rai as well as Chiang Mai, King Mengrai died in 1311 in Chiang Mai.

The creator of the Thai alphabet, King Ramkhamhaeng was ruler of Sukhothai the person who established Theravada Buddhism as one of Thailand’s main religions. His statue in Sukhothai shows him writing.

Those are the Three Kings of the famous statue in Chiang Mai and a few facts about Chiang Mai and Thailand’s history. I hope you found it interesting.

About the Author D for World Travel Family

D, is a very young writer and content creator just starting out for the World Travel Family website. He is a blogger, video editor, graphic designer, and aspiring social media and YouTube ninja. He is and was home educated, and is currently sitting his A levels in History and Biology. He is a snake wrangler, a future crocodile hunter, and has been to over 50 countries during over 6 years of full-time travel. Like most teenagers, he loves gaming which made him an instantly awesome drone pilot, and is largely responsible for his huge and imaginative vocabulary. You can find other posts by D here. Most videos on this site are his work.

The current walls of the Chiang Mai moat were not created when it was founded but are only from the 19th century, when they were "rebuilt". One can tell by looking at the crumbling bricks that make up the wall. It would be wise to include external links or at least citations for the factual information in the articles.

@Alyson for World Travel Family, yes, and children can learn about sourcing information. It says that D is a teenager, so at least 13. That is a good age to learn to cite sources. Otherwise it's all just copyright infringement.

This post was written by a child, I think he was 12 Jeff. But thanks for your feedback. I'm sure there are links in here to historical information if you look. Cheers.

Really well put together and interesting reading D. Reminds me to take in the bigger stories of places we travel through. Thanks for sharing

Brilliant! I've been to Chiang Mai but didn't know any of that. It makes me want to go back. That those temples have survived a thousand years is incredible, and wonderful. Thanks D for an informative and inspiring post. More please :)