The kids and I went to Fort Cornwallis in Georgetown, Penang yesterday, I posted a photo on my Facebook page and Suzi asked me ” What’s in Fort Cornwallis?” So here, just for Suzi, is a brief run-down on Penang’s historic fort. We also have a full post on things to do in Penang if you’re looking for more ideas.

It was a very stormy day and very welcome rain eventually drove us out, the light wasn’t great for photos. See why we were doing a rain dance in Freaking out in Malaysia.

Fort Cornwallis faces the sea in the north of Georgetown, the historic heart of Penang. It’s described as being star-shaped, I didn’t get that at all.

The fort is named after Charles Cornwallis, Governor General of India in the late 1700s.

Captain Frances light took possession of the Penang Island in 1786, established a British trading post and built the fort for the military, the fort stands on the site of his landing. The fort never saw military action, its role was mostly as an administrative base for the British East India Company.

The fort today consists of the outer wall, a flag pole, the gunpowder magazine, some prison cells or barracks and the chapel.

Fort Cornwallis was a big hit with my small boys,they could run around, the canons were a winner and the gunpowder storage building and chapel were good for playing in.

“The Chapel” was possibly  another ammunition storage facility, the walls are extremely thick and there are no windows.

One of the Fort Cornwallis canons has a name, it is Seri Rambai and was cast in 1603, a legend tells that it rose from the sea unassisted when it sank on board a ship. Childless women place flowers on the canon to ask for fertility. There is a big sign saying, “Please do not sit on this canon.” Nobody was taking any notice of that while we were there, we had a quiet word.

So there you go Suzi, that is what’s in Fort Cornwallis, Penang. If you’re coming to Georgetown take a look, it’s only 2MYR to get in, under a dollar, and is a great place for the kids to have a run around and learn a bit of history. Thanks for asking the question!

Back to our main Malaysia Travel Blog page 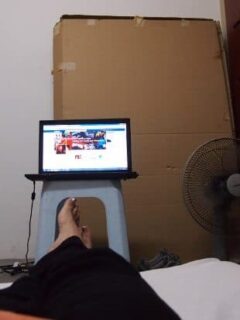 Previous
Freaking out in Malaysia

Next
Staying in a Hostel With Kids
Click here to cancel reply.

I love it!! Thanks so much for the follow-up. What a cool place for a couple of kids to explore. The story if a cannon rising unassisted in the 1600s now being linked to fertility made me chuckle. =)

I hope that rain you got helped improve your air quality somewhat.

Hi Suzi, yes, the haze has cleared now, the wind is blowing it further south and we've had rain every day, we can breath! I love that you asked for more information, it gave me an excuse to share more photos and a few more words, I sometimes feel that I write too much, you gave me a good excuse to write another post. Thanks for being interested!