Monkeys are everywhere here in Sri Lanka. I’m sitting outside our room watching them right now.

You may not see them at first, but they’re there, leaping through the trees. On the coast and in the hill country.

The Garrison Cemetery in Kandy has its own monkey trap. A police officer has to hide behind a tree holding the rope that springs the trap once the hungry monkey wanders inside for a banana. The monkeys are released a long way away from Kandy, we were told.

On the paradise beaches of Mirissa, our guest house owner spent most of his days poking monkeys with a long stick to keep them out of his mango tree. He had a different stick for every type of monkey poking opportunity.

In Kandy the monkey troop comes and goes. You can work out where in town they are by following the loud bangs and smoke trails. Kandyans are more high tech, they’ve abandoned the stick poking method in favour of monkey-scaring fireworks.

This notice was in our room.

Want to know what happens to people who don’t read the notice?

It looked to us like the monkeys got away with a roll-on antiperspirant and a bottle of shampoo.

At least the monkeys will smell good.

But don’t let the monkeys put you off coming to Sri Lanka, ( we love Sri Lanka!) they’re nothing like the horrible Ubud monkeys. Because of hand feeding, Bali monkeys will bite you as soon as look at you

Sri Lankan monkeys mostly stay away from humans. They know people don’t want them around and you can chase them off pretty easily.

My brother didn’t even try that approach when a troop of baboons invaded his house in South Africa, he hid in the bathroom until they were done with his kitchen, you don’t mess with baboons.

I’m going to miss the Asian wildlife. We’re in the UK in a few days, then we’re cruising to a freezing New York City. I don’t think we’ll be seeing many animals for a while.

Back to our Sri Lanka Family Travel Home Page 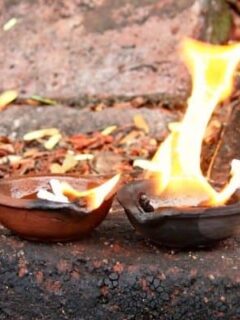 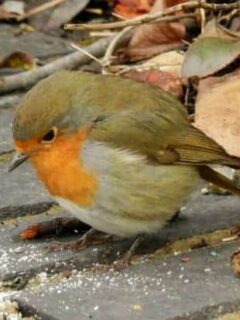 Next
Great Reasons To Be In The UK in Winter
Click here to cancel reply.

I've always thought it would be fun to see monkeys like this, but it sounds like they are extremely pesky. It would be terrifying to have baboons rummage through your kitchen.

I've never been around wild monkeys and I really wonder if I'll be completely terrified or not even care... to be determined...

It totally depends on the monkeys Salliy, Sri Lankan ones have nice manners, as do Sri Lankan people.

A monkey recently bit a piece out of our bag as I was lifting my toddler out of the way! They can certainly be cheeky, like their reputation.

I put my washing all over the balcony in Varanasi - not a monkey in sight at the time, so I wasn't totally stupid - but by the time I want out the building was covered in them. So raced back to my room, flung open the doors to the balcony - face to face with a monkey inspecting my pants. He didn't give them back.

And baboons - no, don't mess with baboons. And if you have an outside toilet, or are staying on a campsite, close the toilet door. You really don't want to sit on one when you get in the night for a wee.