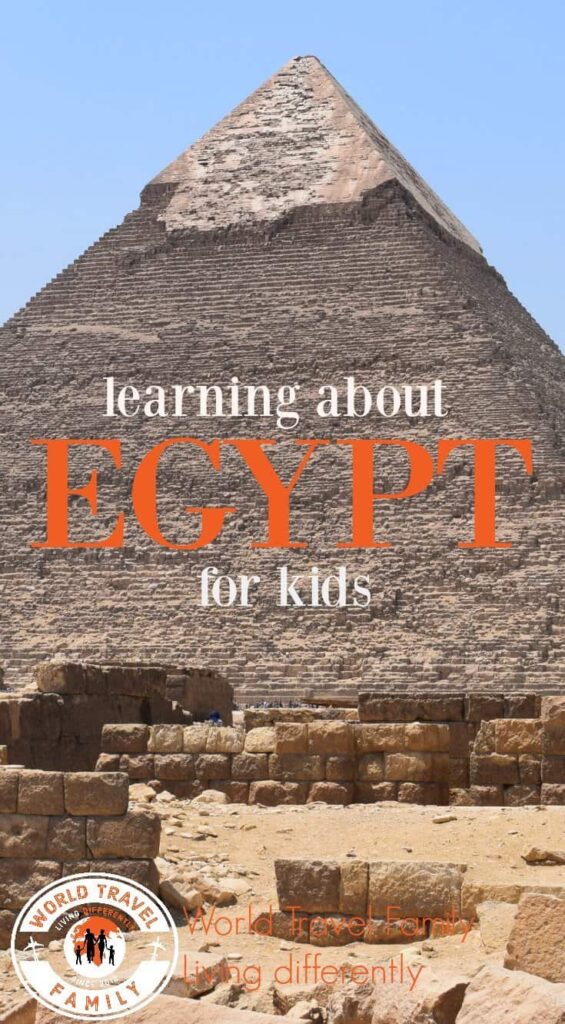 Regular readers will know that we just spent almost a month in Egypt. Why? For fun, obviously and to please our kids who are fascinated by learning about Egypt. Suggested topics and interesting facts for kids to learn about Ancient Egypt include Ancient Egypt, the Sphinx and the Great Pyramid (allegedly the last of the 7 Wonders of the World). These sites hold a unique fascination for children and my boys are particularly interested because of their own reading. We are homeschoolers, unschoolers or world schoolers depending on our mood, so after a month of free learning, we often come home and try to consolidate what we’ve learnt. Our post is about Egypt, including videos and interesting facts. We include some free printable Egypt colouring sheets and worksheets, because when my kids were small, they loved to complete any project involving ancient Egypt.

This time something different. I’ve let the kids write most of this post. They picked their favourite things about modern and ancient Egypt to share with you and your kids. Learning resources, books and movies are also included.

D is 12, Boo is 10, they worked on this post together using what they learned in Egypt, what most impressed them, what they’ve picked up from reading and Google to fill in some hard facts.  Mum then helped fix up some of the grammar and we found our favourite photos and YouTube videos to help tell the story.

This post isn’t so much about travel in Egypt with kids as about what kids can learn about ancient Egypt and modern Egypt. We have facts, useful videos and best movies and books for your kids to explore Egypt. Maybe your kids would like to read this post and you can watch the videos together? They selected the topics they found most interesting and that they thought your kids should learn about. The sections below are in no particular order, use our menu drop down to find what interests you.

I hope you find it our thoughts and ideas on homeschooling Egypt useful Maybe you could incorporate our experiences into your own home education plan or unit study. This is how we learn on the road. Is it better than school? You tell me what you think in the comments, I know what I think. Over to the boys.

Canopic jars were used to contain the lungs, intestines, stomach and liver of mummified people and animals. The lids of the canopic jars were commonly minor deities known as the four sons of Horus their names were

The brain was thought to be the source of mucus, so was liquified, drained and discarded. The heart was  considered the home of the soul and was left inside the mummy.

Shabti, Burials and the Afterlife

Pharaohs were often buried with clay statues called shabti, these represented servants to serve the Pharaohs in the afterlife. The pharaohs were also buried with treasures such as gold, canopic jars, gemstones, food, jewelry, and furniture, all of which were for use after death. Unfortunately, almost all of the tombs were looted by grave robbers. The only tomb found untouched was the tomb of King Tutankhamun.

The video below introduces the ancient Egyptian rituals of burial and the journey to the afterlife, from the Egyptian Book of The Dead.

The Nile and the Aswan Dams.

The Nile is vital to life in Egypt. The world’s longest river supplies Egypt with water. Before the High Aswan Dam was built it brought rich and fertile new soil when the Nile flooded. Now all of the silt is trapped in Lake Nasser. The flooding of the river was vital in the creation of the pyramids on the west bank of the Nile because the stone was quarried on the east bank and transported via boat . This was only possible when The Nile was in full flood, it used to flood right up to the pyramids.

The Nile originates in Burundi and flows through Tanzania, Uganda, Rwanda, Burundi, Congo-Kinshasa, Kenya, Ethiopia, Eritrea, South Sudan and Sudan before reaching Egypt. It eventually enters the Mediterranean Sea after fanning out to become a delta in Northern Egypt.

The video below is about The River Nile, ancient and modern history, and geography. It lets kids see what the Nile is really like, from home.

There are two dams on the Nile at Aswan. The low dam is smaller and older. The High Aswan Dam was built between 1960 and 1970 to generate hydroelectric power and to allow irrigation of crops year-round and in times of drought.

The dam was built under President Nasser, he called it a pyramid for the living and the lake it created, Lake Nasser, is the biggest man-made lake in the world. The formation of the lake meant that many ancient Egyptian temples had to be moved, including Abu Simbel. The lake stretches to Sudan.

King Tutankhamun’s tomb was found by Howard Carter in 1922. It was discovered in the Valley of the Kings which is on the west side of the River Nile at Luxor.

Luxor was called Thebes in ancient times and was the 2nd capital of Egypt after Memphis.

King Tutankhamun was a boy king, he married his sister at ten years old and died only 9 years later. King Tut’s treasure is in the Egyptian Museum in Cairo, his mummy is in a glass case in his tomb at the Valley of the Kings. I found that King Tut’s mummified body scared me a little. The gold was beautiful.

The video is about how the tomb was discovered and the legend of the curse of King Tut. This one is quite long, but it’s really interesting.

We hope you liked this movie, we think it’s the best one.

Akhenaten was an Egyptian Pharaoh who originally went by the name Imhotep IV, like his father, Imhotep III. He changed his name to Akhenaten when he founded the religious cult of Aten, the sun disc. Akhenaten’s religion was probably the first to worship one deity (monotheism) rather than many (polytheism).

Akhenaten was married to Nefertiti. Nefertiti means “the beauty has come” and she was considered very beautiful. There is only one image of her in the Egyptian Museum in Cairo (below).

Akhenaten was really spooky looking. Nefertiti and Akhenaten ruled around 1300 BC, three and a half thousand years ago. Akhenaten’s tomb is thought to be in the Valley of the Kings.

Akhenaten was probably King Tutankhamun’s father (video on DNA analysis of King Tut here), but Nefertiti was not his mother although she was chief wife. Their religion was overthrown after Akhenaten died and Egypt returned to the old gods.

Hathor the cow goddess was the goddess of fertility for women. We saw sculptures of Hathor at the mortuary temple of Hatshepsut and at Philae, the temple of Isis. Hatshepsut was a female pharaoh who wore a pharaonic fake beard to show her power. Hatshepsut came to the throne about 1500 years before Christ, 3500 years ago.

The Pyramids at Giza

The 3 main pyramids at Giza are approximately four and a half thousand years old and were built by the people below. The rock they used came from the other side of the Nile and was floated across before being stacked up by slaves using mud brick ramps.  They are not the oldest pyramids in Egypt, there are older ones further south, we saw those too and went inside.

Cleopatra and The Ptolemies.

It’s really important to know about the Rosetta Stone because this was the key to translating hieroglyphs. You can see it at the British Museum in London. Without it we wouldn’t know nearly so much about ancient Egypt.

We have a few free printable, downloadable worksheets and coloring (colouring) sheets on Egypt, ancient and modern. Just click the links below to view and print. These will all open in a new tab for you, you won’t lose your page.

Read: Books on Egypt for Kids

Rick Riordan’s books on Ancient Egyptian mythology are fantastic and a great way to get kids hooked. The children started reading them around 9 years old and still re-read them at almost 13. This is his series covering ancient Egypt.

Watch: Movies About Egypt for Kids (suitable for kids)

These are all full movies, find them online, if you are in doubt as to age appropriateness for your kids, give it a Google.

Back to our main travel in Egypt page.

I think these kids are pretty well educated on all things Egypt. Whatever you want to call it, worldschooling, homeschooling or unschooling,

I hope you can see how well it works. In writing up this blog post the boys also created an English project, practised their HTML coding, worked on graphic design, photography and art. Because of their interest in Egypt, they pick up new facts all the time and of course, they’ve experienced Egypt today, met the people, seen the cities, contrasted them with the countryside, eaten the food and ridden the trains and buses. They know what Egypt is and what it was. If you’d like to read more about Egypt for kids from our travel experiences, our main Egypt travel blog is here, our post about Egyptian food could also be interesting for kids.

Thank you so much for this post. We are headed to Egypt next week (family of 5 with mom, dad, grandma, boy age 10 and girl age 13). I've read almost every post you wrote on Egypt. The kids, grandma and I appreciate this education post and watched every video and more. None of the books/magazines are available digitally, but we will try to buy them another time. Again, this was very helpful and is an easy way for all of us to prepare for our trip.

I really enjoyed this article as we will be taking our kids to Egypt next April.

Can I ask where in Giza you bought the canopic jars? Were they sold by people outside the pyramids or where they from a shop? I think my daughter would love something like that!

A little shop 2 doors up from our guest house in Giza ( the one with the view) Nice older guy, no hard sell.

This was really informative! I love how in detail you went!

The kids, not me, t's just some basic facts, not really massive detail. Cheers.

This was so interesting! I remember as a kid I became fascinated by Egyptian culture & history when they taught on the subject in school. I'm going to have my son read this, he loves history.

I love this post!!! Thanks a lot! I'd love to read posts like this about other destinations too.