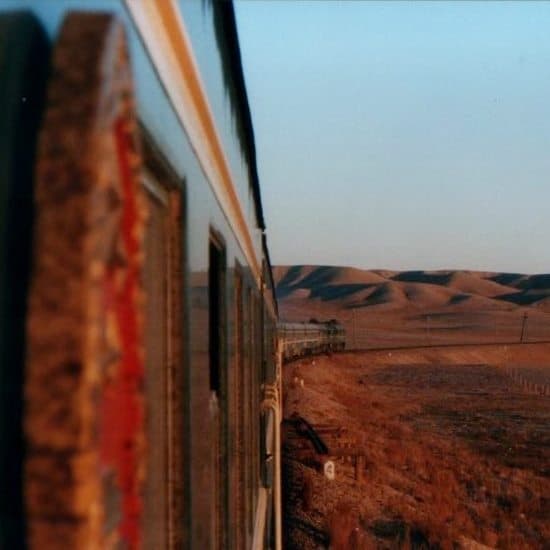 The Trans Siberian-or-is -it Trans Mongolian. An amazing way to see the world.

We took a 12 month RTW ( Round The World Trip) in 2000. A long time ago, I know, but that year was life changing, gave us great memories and was a bonding experience for my ridiculously-younger-than-me-husband and I. ( Read why in 12 Reasons to Take a Round the World Trip). This is part one, starting our RTW in Moscow, Russia, some details, some pictures. If you are wondering where to go on a RTW, maybe considering taking the Trans Siberian or Trans Mongolian trains, I’d say do it, it was fabulous, so different from our then-British normality and a million miles away from the normal SE Asian backpacker hot spots.

Red Square. Yes, really, I was actually in Red Square. I still can’t quite believe it!

Where to go on a RTW?  Russia to China by Train of Course!

Way back in 2000 there was really only one way to get a visa for Russia, you had to be booked onto an organised tour or trip. So that’s what we did. London to Moscow was our first flight, part of our Round the World flight ticket, a short hop, but a giant leap into the unexplored world for us.When you have a RTW flight ticket you can normally only go clockwise or anticlockwise around the globe, so deciding where to go on a RTW isn’t just down to dream destinations, you have to make your itinerary fit the ticket. Russia was good for us! 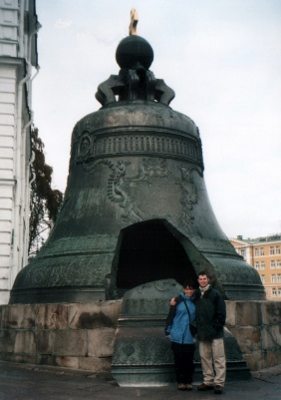 The Tsar’s Bell inside the Kremlin. I didn’t break it!

A taxi driver met us at the airport, he spoke no English but gave us an envelope with our Moscow details and our names clearly marked, so we guessed he was the right guy. He drove us straight to our home stay accommodation with a bare minimum of conversation, well, none, actually, just the odd grunt, but he seemed nice enough. Our fault for not learning more Russian.

We stayed in a very industrial looking block of apartments with a lady who spoke about 6 words of English, she was very nice, even chatty, despite the enormous language barrier. It was brilliant to be staying in a real Moscow apartment in a residential area, we were very pleased with our choice. We had a sofa bed in a spare room, she cooked us breakfast and showed us how to walk to the nearest subway station, giving us instructions to meet our guide in Red Square, and a map. 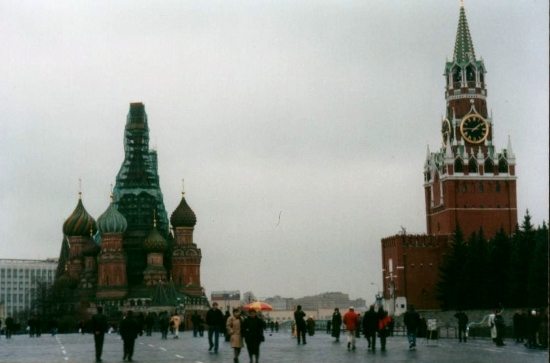 St Basils, on Red Square, was having a bit of a facelift unfortunately.

It was the end of October, very cold, the Muscovites were all in furs, they were concerned about me being cold in just a fleece and a jacket from Thailand. I worked that out from sign language, the international sign for “You must be bloody freezing” is an easy one. I was bloody freezing but I wasn’t going to admit it to anyone! My hearty breakfast of eggs, pancakes, bacon and chocolate coated cheese ( yes, really!) kept me warm enough.

The Moscow subway is great, spectacularly beautiful in places, there is a lot of marble, but none of the signs are in English. We worked out how to recognise the first few characters of the station names and were quite proud of ourselves for never missing a stop.

We spent 3 days in Moscow, the first morning with the guide, getting our bearings, after that we went solo. 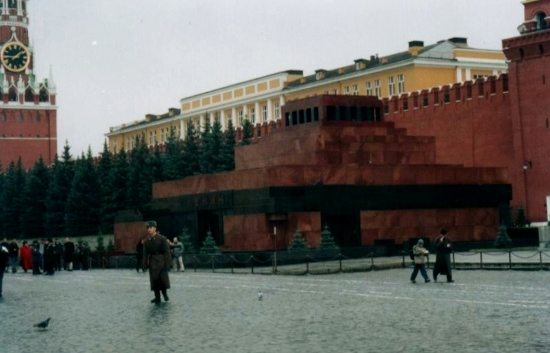 Lenin’s Tomb Red Square, that soldier striding purposefully towards me checked my papers. How cool!

What to do in Moscow

Well, the Kremlin was spectacular, inside there is a full on museum filled with Tiffany eggs , furs, jewels and beautiful royal sleighs. If that’s not enough, there are churches and chapels inside it’s walls  filled with golden icons. The Tsar’s Bell is there, too, currently the biggest bell in the world, broken in casting and never rung. It was commissioned by the neice of Peter the Great.

You can visit Gorky Park, pretend to be spies and take a walk up the river to see the giant statue of Peter the great, arguably one of the ugliest monuments in the world. I thought it was amazing.

You can windowshop and check out the architecture of the historic GUM department store, it sits on Red Square.

You can watch the guard changing at the tomb of the unknown soldier just outside the Kremlin. All that high kicking is pretty impressive.

You can see the Bolshoi Theatre, home of the Bolshoi Ballet. If you have the time and money you could even see a show.

You can wonder at the street stalls selling vodka. They seemed to be doing a good trade.

You can stand and look at the tower from which Ivan the Terrible once ordered all sorts of terribleness.

And you can go see Lenin, lying in state, the first dead communist leader I ever saw, but not my last.

It was wonderful, these are just the bits that I remember, we did more. My lasting impression of Moscow was one of snow, Christmas, sleighs and magic. Rather like Narnia under the Snow Queen.

On our final day in Moscow, monosyllabic taxi guy reappeared and drove us to the station to catch the Trans Siberian-or-is-it Trans Mongolian Express. We were going all the way, Russia to China, by train. He left us in the hands of equally monosyllabic station guy who helped us negotiate the queues, crowds and numerous platforms, depositing us on the right train, in the right carriage, with all of our bags and our pots of instant noodles.

We were very glad of monosyllabic station guy.

We’ll do the Trans Siberian-or-is-it Trans Mongolian in part 2. That train journey and Mongolia itself would be very high on my where to go on a RTW list. Thanks for reading, stay with us, follow the blog or be our Facebook friend, find out where we will go on our next RTW, with the kids and how we get on. We leave soon! 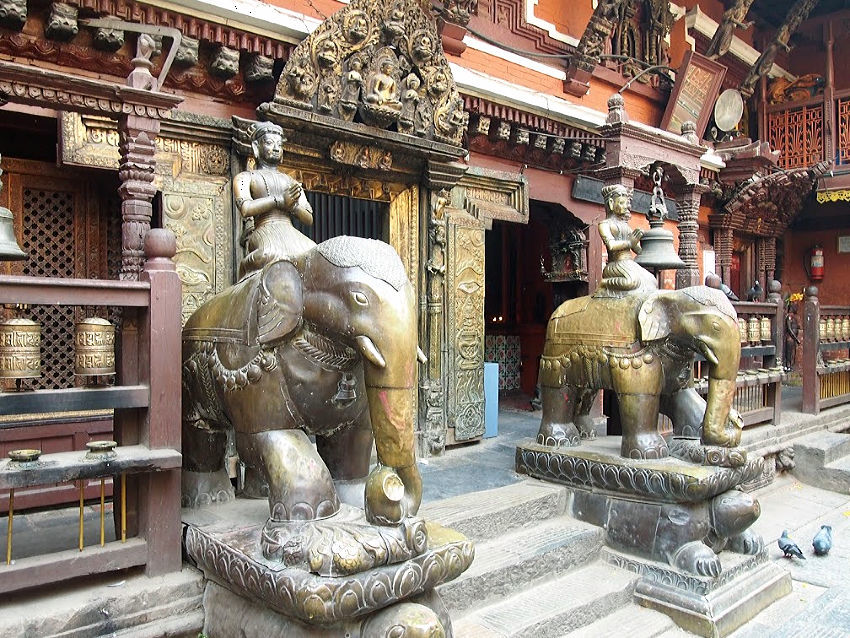 Next
Mongolia on The Trans Mongolian Express
Click here to cancel reply.

Andi of My Beautiful Adventures

Great tips! I hope to make it to Russia soon.

Alyson is the creator of World Travel Family travel blog and is a full-time traveller, blogger and travel writer. A lifetime of wanderlust and now over 7 years on the road, 50+ countries allowed the creation of this website, for you. She has a BSc and worked in pathology before entering the travel arena and creating this website. World Travel Family Travel Blog has been helping you travel more, better and further since 2012, when Alyson and James first had this life changing idea. On this site you can find endless travel information, tips and guides plus how to travel, how to fund travel and how to start your own travel blog.

World Travel Family travel blog is a huge global travel resource. We cover over 50 countries and to make this world travel site we did a lot of research, we travelled full-time for 6 years. We are family owned and operated, covering travel with kids, vacations, long-term travel, gap years, adventure travel, budget, luxury, group tours, and more challenging destinations. We even have a post on how to travel for free. Use the search box, categories, destinations page or menu items to find what you need. Find more travel inspiration and information on our social media.