When Kids Don’t Want to Travel

“You’ll have to drag me back to India kicking and screaming.”

Great. That’s what my elder son, light of my life, apple of my eye, clone of his mum in many ways, said to a visitor last night. It seems this kid does not want to travel. This from the child that, when we were actually IN India, told me he loved it and that it was his favourite country. But no, apparently he hates the food, hates the trains, hates the buses, hates the heat and most of all, hates the bad wifi. Ah, so that’s what this is  all about, computer games.

This outpouring came in the presence of a friend , Penny, a fellow travelling mum of now-grown kids. She didn’t take much notice and neither did I.

I have a feeling he was just saying it for effect but we’ll have a chat when he drags himself out of bed this morning. This child is known for a tendency to say one thing rapidly followed by the exact opposite as an alternate way of looking at things pops into his monkey mind. But can you imagine if he’d have said that in front of certain relatives? Perfect ammunition for them to berate me yet again for not being “normal”.

Lucky it was Penny. Penny gets it, she knows that they turn out well after not going to school, not being like other kids and seeing most of the world before they’re old enough to drink.

He followed his bombshell up with “But mum, you said you hated it too and were never going back.”

“Well yes, that’s true, but only once and that’s normal in India.”

Well, Ok, I did. I think the first time was when I was trying to get us all off a very small bus with very large backpacks and the on-coming storm of humanity almost knocked me and the kids to the deck. The second time was when ear-picking, chappati-handling, granny-poking guy was doing my head in. Oh, there was a third time too, that time I was groped. Thankfully my over- honest child has forgotten one of the three. You can find out about all that in our India travel blog section, should you wish.

We made this for you to save to Pinterest. Anjuna market, Goa, another place they had no fun at all.

But I can’t wait to go back to India, I love the place with every ounce of me and thrive on new adventures. A bit of hardship never killed anyone.  So he’s going, tough, no choice.

We’ll talk. If I thought he genuinely didn’t want to return or had any real anxiety, we wouldn’t. The kids come first on this journey and always have. We regularly have conversations about what they want, how happy they are and what we can do to make them happier.

Both of them want to live in Romania. Little Boo is certain that he wants to keep on travelling, D isn’t really bothered either way. Neither of them wants to go back to Australia.

I want them to see Varanasi, the snows of the Himalayas ( to see where their great-grandmother, other side, grew up), the Taj Mahal and the giving and service at the Golden Temple. They’ve asked to see wild tigers, sadhus, the Dalai Lama’s residence, forts in Rajasthan, Indian rhino and the cranes at Khichan. They know about all these things and places because I find documentaries, You Tube videos, books and poems, to inspire them, educate them and get them thirsting to see them with their own eyes. It’s part of my job description as educator and worldschooling facilitator.

I haven’t yet told my fabulous son that on this trip we’re going semi-unplugged. Now we have our base established in Romania, we can cut our usual travel essentials down to a load far easier to carry. He won’t be happy. But, like India, I think it’s good for him.

Advice For When Kids Don’t Want to Travel

Don’t ignore them, they need to be heard.

Talk to them, find out exactly why. Is something worrying them? Will they miss a particular thing or person? Is it just nerves?

Remove as many unknowns as possible, tell them what’s going to happen, to the best of your knowledge.

Show them images of the hotels or guest houses you will be using, if at all possible.

Show them books, videos, anything, about your destinations, try to get them excited.

Don’t show any anxiety yourself, monkey see, monkey do.

Let them take the familiar objects that they really need. The blankies, special bears, pillows or ( in our case) sarongs. But don’t go crazy on toys, they rarely play with them.

Boo says “Tell them about the chocolate and sweet stuff.”

Show them the pictures of my kids having a terrible time all over the world.

Nobody knows for sure what’s best for them, it’s all a big experiment, but we may as well have adventures together along the way rather than pack them off to school every morning and miss out on so many years of being a family.

What about you? Have you ever met any travel resistance from your kids? Did everything work out OK?

We’ve been travelling for over 5 years with our children now, we are nomadic, digital nomads if you like. We love our lifestyle. Sign up to follow our journey at the top of the side bar. 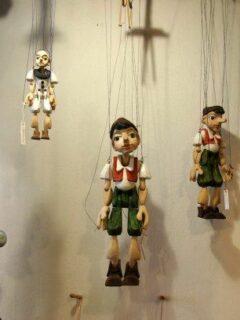 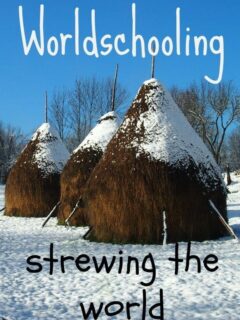 Next
Strewing The World. Strewing, Homeschooling and Worldschooling
Click here to cancel reply.

Alyson, love reading about your journey, even though I have no desire to be nomadic. We do love travel (then love returning home too) and homeschool our two kids. Inspiring them first with pictures, YouTube vids and info about a destination is such an effective way of inspiring curiosity. Love your work

I think this speaks volumes to the way people process information. I love your tip on listen to the kids. Their feelings are valid, too!

We spend a lot more time getting ready for a trip than we do actually traveling. Our lifestyle is pretty traditional in terms of work schedules for my husband and my kids are at the moment traditionally schooled. BUT, preparation is key, I think which includes scheduling some downtime for just 'being'. Whether that involves the beach or lounging on the couch...minds need rest to process and rejuvenate!

We read about a trip (and I have created long destination specific reading lists) and learn about customs before we go. Right now, we are learning about the Christmas customs of Greece and making Greek Christmas cookies before our trip! This gets everyone mentally thinking about a destination and learning, too!

Interestingly Natalie, we're in Romania now for Christmas, 2 nd time, ad my son is doing Minecraft Homeschool. Guess what he's learning about there...Romanian Christmas traditions! I bet he could teach the teachers a thing or two ;) We asked them a few months ago where they wanted to be for Christmas, their pick was Romania. A tric this year will be Rome, my son's pick for his birthday, he loves the history, last year he picked Greece. It's mostly about them. We've just spent 6 weeks in Thailand and in that time returned to Chiang Mai 3 times so they could hang out with friends. They're very happy with this incrdible life. But if I want to go to India again....they're coming, no choice !

We just spent 10 months on the road in the UK and Europe. The girls turned 10 and 13 during the trip and were great travellers - although the tendency to want to lay about and not go explore some times was rather amusing 'but you said we were having a lazy day' - Their idea of a lazy day and mine differed! We bought a little caravan and shared the tiny space the whole time. Certainly did not mes with their schooling, though we tried to do a bit! Morocco was their favourite place...

Yes, we've definitely experienced this – and not just the kids, but the parents, too. Of course, we've been traveling for over 6 years now, so have gone through several cycles of burnout. We've generally feel more "done" with travel after (or during) an intense road trip, or several weeks of moving too fast, or too many days out in a week, without time to process, write, create, or get involved in the community more.

We have to keep learning the lesson that we need to stay in places long enough to allow us to sink into them better, while maintaining our own sense of balance. We've also found it helpful to balance the novel with the familiar / or the easy with the hard. Places like Central America and Southeast Asia are lovely and interesting in so many ways, but are more stimulating on the senses and tend to take more energy than traveling to places like New Zealand and Canada, or even Europe, where the language and culture are somewhat familiar.

So this year, after overwhelming ourselves with an enjoyable but tiring 2 weeks in Fiji, we're spending 3 months in Nelson, New Zealand (the first week of which we haven't left the house at all), followed by 5 quick days in Sydney, Australia, 2 months in Ubud, Bali, and then 6 months in Victoria, Canada (interspersed with a few trips to the US for some unschooling conferences we're attending and speaking at). Having a home base to return to when traveling is also something we're considering setting up in a few parts of the world, rather than making every country new. Having sold our house to travel, that's something we've realizing we'd like at times. We'll see how we feel at the end of the year. It's a continual learning process for all of us. Thanks for sharing your thoughts so vulnerably.

I can imagine My own kids Say simular things. We've been Travelling earlier - but want to do it again. They are 6 &. 9 now, boys. We go 1 1/2 Month now to Tyrkey. I Love following your blog.. Lisa