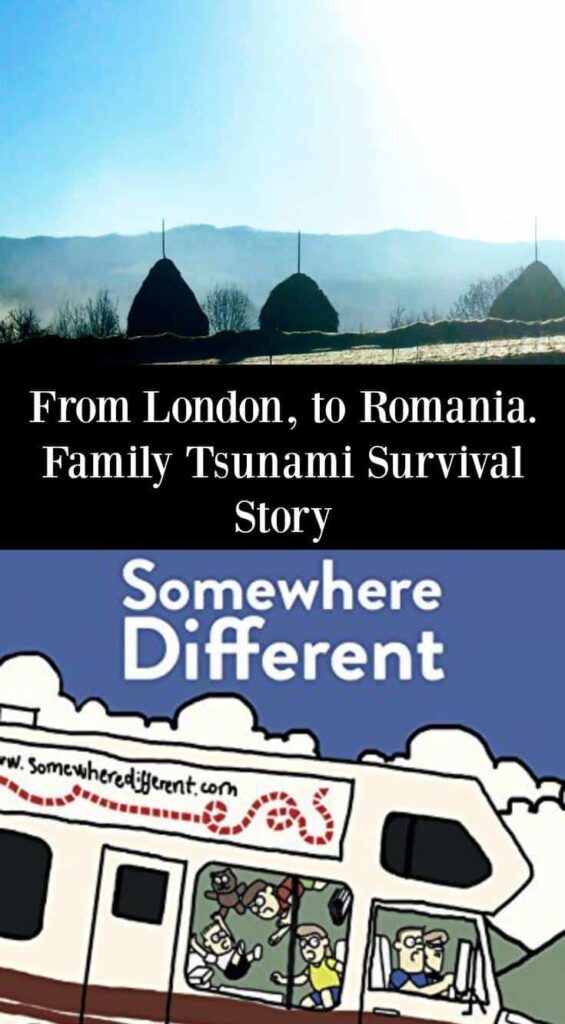 I’m going to introduce you to our neighbours and share a book, Somewhere Different, with you. I want to let you now about a family with an incredible survival story and an interesting outcome. It’s a story that has now become entwined with ours. We met them over the internet and we’ve ended up neighbours  in Breb , Romania. I want you to meet the Ridgleys.

Somewhere Different by Duncan Ridgley is his family’s travel adventure story and one that almost ended in tragedy.

He, his wife and 3 kids were in Sri Lanka on the day of the Boxing Day tsunami. Not just in Sri Lanka, but on the beach in Arugam Bay.

They took the full force of the waves and lived to tell the tale. Duncan, a former tabloid paparazzi, wrote down his family’s story partly as therapy. It’s worth a read.

You’re probably a family traveller, like me, maybe you homeschool, worldschool or unschool, like me.
You certainly have an interest in the world, adventure, education and alternate lifestyles.
If so, you have something in common with the family behind the book, Somewhere Different.

I first met Duncan Ridgley through an email. He described himself and his family as “You, 10 years ago.” Unfortunately that’s where the similarity ends.”

He and his wife, Penny, packed up their 3 children, bundled them into a camper van and took off around the world on a mission to find ” Somewhere Different”.

Duncan was disillusioned with life in London. His career, as a top tabloid newspaper photographer and later in advertising, wasn’t giving him or his family the lifestyle they needed.

It was an adventure that almost ended in tragedy.

They were on the beach in Sri Lanka on the day the devastating Boxing Day tsunami hit. By a miracle, all of them survived, their youngest child was just 7 years old.

It’s scarred them all, an experience like that is life changing, but the good news is, those three children are now grown and, after opting out of years of formal education, went on to college successfully.

Penny, Duncan and the kids built and own two hotels, one in Egypt, one here, in Breb, Romania.

Their story has become part of our story and I’d like to introduce them to you.

Duncan gave me 1 day to read his book Somewhere Different . We were about to move on and he had just one copy left. It’s a real, full-sized book, not a slim volume at all.

I lay on the guest bed at his farm-house in Romania and read most of it in what little time I had, I couldn’t put it down. I managed to read the opening chapters, from London to Bosnia, before skipping to the end and the tsunami accounts.

Duncan is not a professional writer, he is a photographer. He has dyslexia and wrote this book partly as therapy, to put his experiences into words and to recreate the family diaries and videos he lost in the tsunami.

They lost EVERYTHING in the tsunami. Except their lives.

Their experiences on that day in Sri Lanka were worse than I could ever have imagined. Sri Lanka is dear to our hearts and I’ve watched every video on You Tube, every interview with tsunami survivors, reading the story is far more harrowing. There were 5 huge waves, the ordeal lasted all day. They were the only family on that paradise beach on Sri Lanka’s east coast, not to lose somebody that day.

Somewhere Different isn’t just the story of that nightmare day, it is their family adventure travel story, from the beginning.

I think you’ll enjoy it, I wouldn’t be recommending it otherwise.

The book, Somewhere Different, if you have an interest in long-term family adventure travel, world schooling, RVing or alternative ways of living, it’s for you. It’s the most fascinating real family travel story I know.

You can click through to Amazon to buy Somewhere Different on Kindle or as a paperback here.

If you are interested in visiting our part of Romania, take a look at the Ridgeley’s beautiful hotel, The Village Hotel, Breb.

All images used with permission from Duncan Ridgley, taken from his websites, Somewhere Different and, Village Hotel Maramures. I have emails that demonstrate full permission was given.

Their story isn’t on any of their websites, it’s only in Somewhere Different , Book 1 takes the adventure to Sri Lanka, book 2, where they regroup and move to Egypt to build a hotel, is still to come. Duncan Ridgely now lives in Ukraine from time to time. He owns houses and land in Breb which are for sale. His wife runs The Village Hotel and does a brilliant job.  When he’s not in Ukraine he sometimes hides away in a property they own in Siwa Oasis, Egypt. Penny and the kids are still very dear to us.

Would be a great christmas gift! Thank you!

What a heart warming story for a family that has been through so much.

It sounds like you've made some great friends with the Ridgleys who sound like an inspirational family and have done well by their children.

I struggle to read a book in a month so good on you for finishing it in a day, it sounds like a must read.

Purchased. Thank you for the recommendation!

What an amazing family! I will be encouraging the Mr to buy me the book for Christmas.

I did too. Looks like it will be an interesting read.