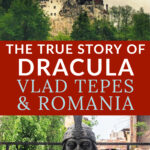 Irishman, Bram Stoker, published his classic Gothic horror novel “Dracula” back in 1897. The cursed count, based in Castle Dracula, Transylvania, was on a mission to reach British shores in search of fresh blood. Van Helsing and a group of upstanding citizens who knew all about vampires, garlic and stakes, did battle with the Count, preventing the vampire’s curse from spreading throughout England. But Bram Stoker didn’t invent vampires. Transylvania isn’t a fictitious location and the Count is thought to have been based on a historical figure. In Romania, vampires are big news, if you want to explore the vampire and Dracula legends and history, come visit!

We’ve been hanging out over 3 years in Romania ( here, in our village, Breb), Dracula, Romanian vampires, castles and legends have become part of our daily life. So let’s talk about Dracula and Romania.

Origins of Dracula and Romania

European folklore and stories of vampires influenced Stoker’s creation. His research lead him to an essay, “Transylvania Superstitions”.

In the local villages there is a belief in evil spirits called ghosts or “steregoi”. It was accepted that living people “strigoi” existed, normal by day but at night their souls left their bodies and haunted the village tormenting residents.

These evil spirits haunted their prey from midnight until the first cock’s crow, when their power to harm people evaporated.  It is thought that Dracula’s character derives from these local myths.

The original name of Stoker’s count was to be “Count Wampyr”. He changed this to “Dracula”, after reading Account of the Principalities of Wallachia and Moldavia with Political Observations Relative to Them in Whitby library.

The name Dracula was carried by the descendants of Vlad II of Wallachia, Vlad II took the name “Dracul” after being invested in the Order of the Dragon in 1431 (founded by the king of Hungary to uphold Christianity and defend the Empire against the Ottoman Turks.)

In Romanian, the word dracul can mean “the dragon” or “the devil”.

Vlad Dracul III was the Transylvanian-born son of Vlad II. During his reign (1456–1462) Vlad Tepes of Wallachia is said to have killed tens of thousands of people, mainly by impaling.

The sources depicting these events are records by Saxon settlers in neighbouring Transylvania, who had frequent clashes with Vlad III.

Vlad III is revered as a folk hero by Romanians for driving off the invading Ottoman Turks, many of which, he impaled. The people of Wallachia knew Vlad III as Vlad Țepeș (the Impaler). In Romania Dracula became popular after publication of the Dracula book.

In the novel, Stoker mentions that Dracula fought against the Turks, and was later betrayed by his brother, historical facts which point to Vlad III

It is thought that Stoker’s description of Dracula’s Castle was inspired by fortifications in England, or an illustration of Bran Castle in a particular book on Transylvania. Stoker was an armchair traveller, he had never visited Transylvania or Romania.

The following locations in Romania, mostly in Transylvania, are associated with vampires, Dracula or Vlad Dracul.

If you plan to take a vampire tour of Romania, include these sites and castles.

In the Dracula novel, Harker visited Bistrita in northern Transylvania and stayed at a fictional hotel. The Dracula Castel Hotel (see below), possibly Romania’s most well-known Dracula themed hotel, is nearby today.

Vlad Tepes actual castle isn’t in Transylvania, it’s in Wallachia. Bran Castle is the only castle, in the right area, that matches Stoker’s description.

The fictional count’s castle was located high above a valley perched on a rock with a flowing river below in the Principality of Transylvania.

“on the very edge of a terrific precipice, with occasionally a deep rift where there is a chasm [with] silver threads where the rivers wind in deep gorges through the forests.”

Bran Castle, “Dracula’s Castle” is a big tourist draw boasting a Vampire themed market and various small sideshows at its entrance. It is also a venue for parties, events and Transylvanian Halloween celebrations.

My children loved visiting, but some find it a little tacky and the interior of the castle disappointing.

Vlad Tepes’ real castle fortress, perched on a mountaintop in the forbidding Poenari forest. Unfortunately not in Transylvania, in Wallachia.

If you climb the steep steps today you’ll be rewarded with incredible views from this mountain-top perch, along with a few reminders that this castle did belong to Vlad, outside you may see some unfortunate victims being impaled along with a hangman’s gibbet and execution tools.

The local authorities have electric fences protecting visitors from bears as they hike through the forest up to these evocative ruins.

The Old Princely Court in Bucharest

Palatul Curtea Veche is in the heart of old Bucharest, the site is small but the spooky subterranean chambers are well worth the admission fee. A blood chilling statue of Vlad Tepes stares down menacingly at modern-day visitors.

Snagov Monastery, in Snagov Lake, is said to be where Vlad’s remains are buried. Snagov island has an ancient monastery, one of the oldest in Romania.

The surrounding lake is beautiful, fairly unspoiled, and is the location for many wealthy homes.

This stunningly beautiful 14th century citadel was the birthplace of Vlad Tepes. You can visit the building in which he was born, now a restaurant.

Read more about Sighisoara below, it’s a real highlight of any trip to Romania. And a vital stop on your Romania Dracula tour.

A village untouched by time, where Dracula legends are still told. It is allegedly inhabited by descendants of the followers and servants of Vlad Tepes. It is just 6Km from Vlad’s real fortress at Poenari.

Vlad led raids against Saxons merchants from here. It’s a pretty medieval town and squarely on the tourist map.

We have a detailed post about Brasov here, it’s one of Romania’s most visited destinations and a good base for exploring Transylvania. You can visit the Romanian Bear Sanctuary just outside Brasov.

You will find many, you can drink Vampire Wine and eat Dracula Soup. There are Dracula Hotels and restaurants.

Dracula and vampire-themes souvenirs abound in any town connected to the vampire legends and throughout Romania, even at the airport, you might find Dracula wine or haunted castle memorabilia.

It’s all great fun and something kids, in particular, love.

If you’re looking for something unique and special, how about a Dracula themed Halloween tour of Transylvania? Visit many of the places mentioned above before staying in a medieval castle for a Halloween party you will never forget.

Read more about Dracula Halloween tours in Transylvania here, they’re a great way to experience Romania’s history and culture, while getting your vampire fix. These tours don’t only run for Halloween, but why not maximise the spooky fun?

Further Reading on Romania, Dracula and Vlad Dracul or Tepes

In the Footsteps of Dracula, 3rd Edition

If you’re heading to Romania Dracula should be top of your reading list!

Get your copy here!

We have been staying in a village in Romania for over 3 years, learning every day, mostly by watching, as we slowly pick up the language. It’s been a fascinating experience and Romania occupies a special place in our hearts. We hope you found our post on Romania Dracula and vampires useful. Romania is incredibly rich in history, myth, and legend. We recommend Romania highly as a European destination. Find our Main Romania Travel Guide Here

I turn to a vampire any time I want to. I become a vampire because of how people treat me, this world is a wicked world and not fair to anybody. at the snack of my finger things are made happened. You are young you have the whole world open to you. You can be anything that you choose if you apply yourself and try hard to work toward that goal. But being a Vampire is not what it seems like. It’s a life full of good, and amazing things. We are as human as you are... It’s not what you are that counts, But how you choose to be. if you want to become a powerful vampire kindly contact the vampire kingdom on their email

Best time to visit Transylvania is on Halloween. A 7 day Dracula tour on Halloween with 3 Halloween parties included was awarded tour of the year 2019 by Tourradar

Are you tired of being human, having talented brain turning to a vampire in a good posture in ten minutes, Do you want to have power and influence over others, To be charming and desirable, To have wealth, health, without delaying in a good human posture and becoming an immortal? If yes, these your chance. It's a world of vampire where life get easier,We have made so many persons vampires and have turned them rich, You will assured long life and prosperity, You shall be made to be very sensitive to mental alertness, Stronger and also very fast, You will not be restricted to walking at night only even at the very middle of broad day light you will be made to walk, This is an opportunity to have the human vampire virus to perform in a good posture. If you are interested contact us

Sounds exciting! Being human is over-rated. Make me a vampire.

Thank you so much for this article! I loved it a lot!!!! I'm so excited to go there and meet Dracula!

Hello there! Great article! I'm Romanian myself and I need to thank you for appreciating our country and for your beautiful words in the comment section. One thing that is wrong about this article, is the "Dracul" phrase. In Romanian, Dracul means "the devil" only. It doesn't mean "the dragon". The word for "dragon" in Romanian is the same as in English: "dragon" but pronounced in a different way ????