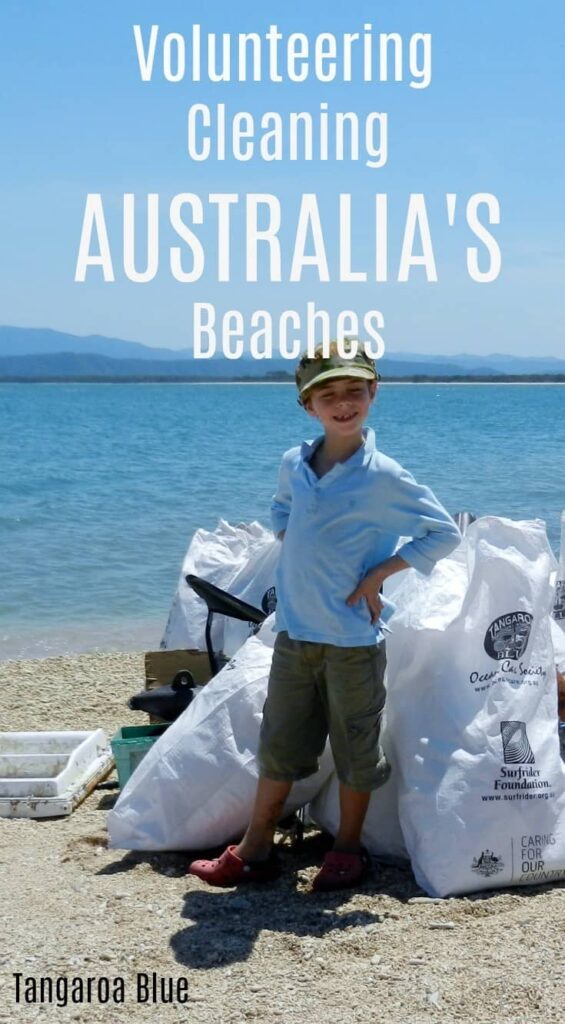 I’d love to get a long-term volunteer position while we are traveling, but, it’s hard to get into. it’s often a voluntourism scam and it is expensive for the volunteer. For me, I don’t think it’s ever going to happen. Somebody else, with fewer family commitments and more cash will have the privilege of taking care of orphaned orangutans and elephants. But it is possible to find less glamorous ways of putting something back. Our way was to become beach cleaning volunteers with Tangaroa Blue in Australia.

We’d regularly spend a day collecting trash and plastics on beaches in the Cairns and Port Douglas region and it was always an eye-opener to see how much trash ends up on pristine, deserted beaches and islands in such a sparsely populated area in the Great Barrier Reef marine park. Very little is dumped there, but some is. Most of the plastics are washed up or arrive from our rivers in wet season rains. All of it needs picking up and all of us, every person in the world, should help.

Obviously, our job starts with not buying plastics, that goes for individuals and store owners too. The plastics have to stop. In our quest to be more eco friendly travellers, we continue to work with this organisation to this day. Here’s how it looks, these little boys are grown now and our plastic problem is nowhere near fixed, but at least more people are aware and we’ve seen change all over the world.

Being a Beach Cleaning Volunteer with Tangaroa Blue

We were in Australia at that time, there we tried to do our bit by collecting junk from the beaches. Families can volunteer, children are welcome and they can really get involved. Kids are the right size to go scurrying into bushes to collect plastic bottles.  It’s like a treasure hunt for them, loads of fun and a lovely picnic lunch in a beautiful new place.

If you are traveling anywhere in Australia it’s something you could get involved in too, just check out the Tangaroa Blue website for the list of upcoming clean ups,  send an email and turn up on the day wearing sun protective gear and a smile.

This post originally came into existence almost 10 years ago, my boys were tiny tots. Now they are teens and the plastic problem is, if anything, worse. At least we are better placed to help now. Two of us recently spent 8 days cleaning beaches on Cape York, the team shifted 1.7 tonnes. We made this little video, see how untouched this area is, nobody goes there. But 1.7 tonnes of trash came off this beach.

Named after Tangaroa, the god of the ocean in Maori and Polynesian mythology, the Tangaroa Blue organization tries to look after the health of our oceans, minimizing marine debris and raising awareness of its negative impact on wildlife.

Groups of volunteers get together to blitz a given location on a given day. The organizers supply the equipment, gloves, bags and sharps boxes. They often provide transport too. Last time volunteers went by boat to beautiful, deserted Snapper Island, a place that we would never have been able to see otherwise. The whole beach is made of coral and shells, dolphins were feeding just offshore. What a shame previous picnickers had left all of their rubbish there.

It’s an awesome team effort and one that results in hundreds of Kgs of marine debris being collected, sorted, categorized and properly disposed of, every time. On our first beach clean up, on Snapper Island, 35 volunteers collected  235 Kg of junk. Finds included a car battery, a fridge, 115 thongs and endless small pieces of plastic and foam.

It’s not just about collecting, it’s about identifying sources and trying to intervene to decrease further contamination. We often pick up balloons, including weather balloons from the Cairns Bureau of Meteorology. I think conversations are being had about this practice.

Getting Children Involved In Volunteering to Clean Beaches

We lived on the doorstep of the Great Barrier Reef marine park. We’ve taken the children to the reef many times to see exactly what it is we’re trying to protect, it’s an incredible and fragile ecosystem.

We brought the kids up homeschooled, sometimes called world schooling as a huge amount of travel and real-world experience was involved. We were always on the lookout for interesting ways to educate the kids, so these days out were not truly altruistic. Things rarely are. From pre-school to now, young adults, the kids have learned so much about science and our world through working with Tangaroa Blue.

Our beach cleanups had an amazing impact on the children. They never walk past a piece of plastic or a cigarette butt on a beach, we always had to pick it up. They are aware that any plastic on the street could be washed into storm drains and head directly to the sea, we picked that up too.

They understood the threat to turtles and other marine animals from marine debris, and we would talked about how whole food chains and ecosystems could be affected in a catastrophic way. They cared and truly wanted to help.

They saw from an early age that if a thing needed doing, they could be the ones to do it.

They met and talked to a good cross-section of people, from passing backpackers to senior citizens. People were always delighted to see the kids getting involved. ( What people like to think of as socialisation, in educational terms.)

They see their parents and other adults giving their time freely. It’s a good behavior to model.

We also ticked educational boxes. In homeschooling we report on what progress the children are making. Curriculum areas on the environment and how it changes through interaction with people are clearly covered, plus large chunks of science, geography and maths. We sort, count, measure and weigh everything. That sounds like maths to me!

Catching them young like this, I hoped, would make them aware of their obligations to the environment for the rest of their lives, before they become jaded and decided it was up to somebody else to do something about it. I hoped to make more responsible global citizens.

If you are interested in marine conservation you may like to head over to Green Global Travel and read an excellent interview with Jean-Michel Cousteau, son of one of my heroes, Jacques Cousteau. He’s 71 now,  still working hard, trying to make sure our oceans have a future.

What do you think? Could you help out humanity as you travel or as part of your normal family life?  Check out the Tangaroa Blue website to get involved with beach clean up volunteering. This is a legitimate way to volunteer as you travel and not a voluntourism scam, a valuable part of any world schooling education. Ours has continued through 50 or so countries, but there’s no reason you can’t start local. You know, if kids weren’t confined to classrooms they could be out there helping. I often wonder why they’re not.

Good to see that you offer people to come and join your team in cleaning the beach. It is good for us too because polythene bags are harmful to our society and more importantly it cause of water main stop or occur of drainage issue in the cities.

I had no idea that you could do this in Australia. What a great program, and a great way to give back to this incredible country. It's such a shame that it's a service that's needed because of the inconsiderate folks that dump trash.

I would love to hear more how not to fall victim to voluntourism as you put it. I would be interested in volunteering abroad but you worry about the expenses and how much value things are to the local economy

love how you turned this into a fun kids activity - just the right size to send them scurrying into the bushes! :-) Not everyone can work out those ideal volunteering opportunities, but the smaller tasks like this are equally important and have an impact. Good for you guys!

This is an amazing way to give back! I love that you have your kids involved as well. It's insane to think about how much plastic and trash are floating around out there, just waiting to ruin great destinations or harm wildlife. Thanks for being part of the solution.