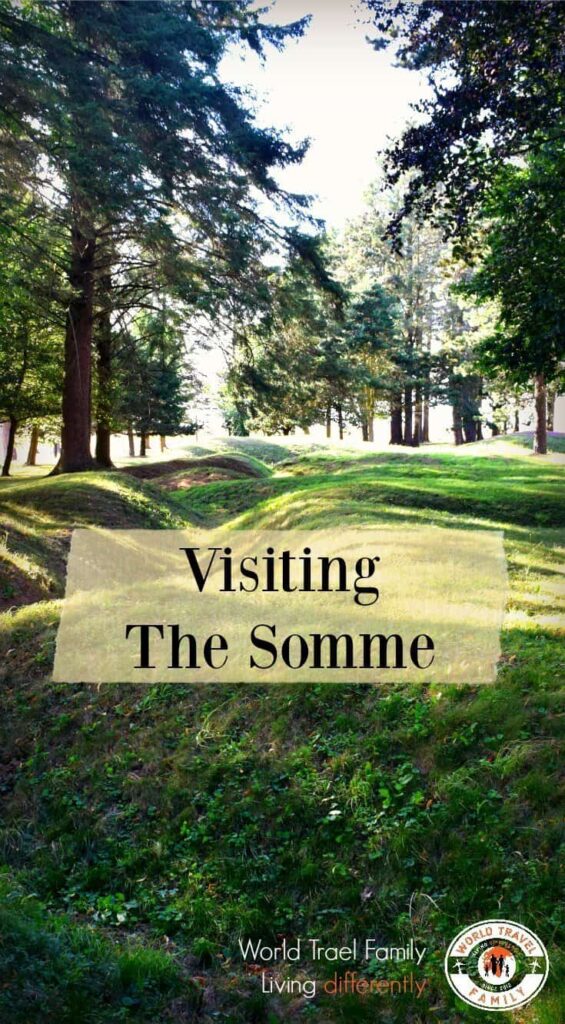 When we left our hotel just north of Paris to make our way to the ferry port at the end of our trans Europe road trip we didn’t know that our evening’s accommodation was in one of the most fascinating and historic parts as France. Not far from Amiens and our hotel, I spotted a sign for the Somme Valley. A little later a second sign for a memorial cemetery, 2 and 2 made a certainty, we were on the Somme Battlefields. Rolling fields newly harvested and quaint rural villages dotted the landscape as we took a diversion and followed the signs to the first cemetery of many in just one fascinating and memorable afternoon. The kids whined, they just wanted wi-fi and hotel comforts, but even they found some interest as we started touring the graves. Things got more and more interesting for them as we found craters, trenches, history and tragedy exploring this small region of massacre.

This historical period first made its way into the kids’ joint consciousness back in 2014 when we were based in London for the 100 year anniversary of World War I‘s beginning.

Red ceramic flowers spilled from the Tower of London and towards the Thames, we read war poems online and watched dramatisations about tragic boy soldiers on the BBC. Our day on the Somme, shortly before the second round of centenary memorials added an extra layer of understanding and depth to their world schooling or homeschooling education.

There is no way anyone could learn as much from a book as by spending an afternoon on these battlefields.

This is a story of photos because that’s the best way to show you some of what’s here on the River Somme.

Photos from the Somme Battlefields, France, 2017

Where to Visit on The Somme Battlefields

There are many sites of interest and cemeteries in the Somme valley. Rather than listing every destination myself, I’ll send you to this site, it’s the one we used to figure out where to go.

We highly recommend taking a car. If you want to check out our road rip costs, click-through.

Where to Stay When Visiting The Somme Region

We stayed in Amiens at the Première Classe Amiens, an ideal low-cost road trip hotel with family rooms. This region is dotted with quaint villages and moderately sized towns and cities, there are hundreds of accommodation options.

We’re on our way to Vietnam. Another country, another war. I’m writing this from London, curled up on the sofa with a child snuggled into me on either side. We decided to start learning about Vietnam this morning and the movie Good Morning Vietnam is their first real glimpse of the horrors that conflict brought. It’s sad, so very sad. But they have to know and they have to remember. So on we go, to learn more about the world, that it’s fabulous and it’s tragic. I hope their generation fully learns the lessons of history so clearly presented for anyone who pays attention.

Behind which cafe did you find the restored trenches?

There's a link in the post to a site with maps and full information Cathy.

My Dad is a Vietnam Vet. While he didn't lose his life there, he indeed left it there. When he came back, under 20 years old and stricken with SEVERE PTSD that would go undiagnosed for 25 years. By the time it was he had already ruined his marriage, his children childhoods and wifes life -- not to mention his own. It took him jumping out of a 5 story window int he midst of a flash back in front of my 17 year old brother for them to start taking notice. By then it was far too late. He died last year, just a few months past his 65th birthday. He moved in with me the last 6months, he stopped recognizing me but never forgot me -- he would talk bout me not realizing it was me he was talking to. He ended up in diapers, I would bathe him in he middle of the night when he would have bowel movements, bells on his bed so I could hear when he would try o get out of bd as his mind was much stronger than his body. The war took everything form him -- the military used him up in his youngest years - his strongest years and threw him away like garbage thereafter. IDK if there are a group of veterans more mistreated then those of Vietnam.

What a tragic story Stephanie.

I would definitely like to see this, some day!