Would you believe me if I told you that I didn’t know Assisi was in Italy until our week in Umbria with Our Whole Village?

I’d heard of St Francis of Assisi but had no idea who he was or what he did. St Francis Xavier is my particular favourite saint because we keep tripping over his miraculous trail all over the world, for all I knew it could have been the same man.

As I was getting lost in my tiny comedy-hire-car on day one, we rounded a bend and above the fields of sunflowers, saw the view above.

Pretty impressive right? But the view from the other side is even better.

Who Was St Francis of Assisi?

Very briefly, because I’m supposed to be educating my kids not my readers, Francis wasn’t even his real name.

The soon-to -be-saint and founder of the Franciscan order was born Giovanni in 1181 or 82. There is some confusion over that. Francesco ( the Frenchman) was a name given to him by his father, a wealthy merchant, because he happened to be in France at the time of his son’s birth.

When he was 20 years old, Francis fought against neighbouring town Perugia, was imprisoned, and spent one year in jail.

He was always a charitable chap, after his release from jail he went through some religious and health crises before devoting himself to solitude, prayer and the service of the poor. When visiting Rome as a pilgrim he swapped his clothes with a beggar before returning to Assisi. Some time later a leper crossed his path, he gave the leper all of his money, kissing his hand, before taking up total service of lepers and the sick, dressing in rags from that day on. His father wasn’t happy with this and had him disinherited. St Francis rejected his father saying God was the only father he now knew.

After several years of total poverty, he began to preach to the poor of Assisi, despite not having priestly status. He gathered round him 12 disciples and took his group off to Rome to ask the Pope for approval  of his work, which he received.

The preachings of Francis and his followers brought about a Catholic revival of great significance in Umbria. In 1212 he founded the second religious order, that of St Clare, the nuns of the Poor Clares.

In coming years he set out into the wider world to preach, with varying success, he endures ship wrecks and imprisonments.

Francis died in 1226 at the age of 45 , 2 years after a miraculous vision involving stigmata. He was canonised 2 years later.

I hope I got most of that right, I’m not Catholic.

The Basilica of St Francis at Assisi

The boys and I visited twice. The first time, we appreciated the beauty of the place and showed due respect to the Tomb of St Francis, but the second time was where the magic happened.

We had the most amazing guide organised for our group by Our Whole Village.

Silence is required inside the Basilica, so Anne communicated with us via a tiny microphone and ear pieces. Her child friendly narrative really brought the experience to life for the kids and the grown ups, she had a knack for keeping small boys’ attention from wandering. Anne’s tour was perfect for kids.

Photography is strictly forbidden, so I have no images to share with you, but the frescos inside are stunning and tell the story of the life of St Francis in pictures. It was the best way to hand knowledge down in those days and reminiscent of Buddha’s story as told on the walls of temples in Asia.

Two devastating earthquakes hit Assisi within hours of each other in 1997. Four restorers died under the collapsed roof inside the Basilica and there was severe damage around the town.

A huge restoration project re-pieced the building, strengthened it and restored the fallen frescos to an astounding extent.

We wouldn’t have known any of that without Anne.

We Recommend an Assisi Tour, and Plenty of Time.

The rest of Assisi is a delight to explore, the town is littered with frescos and interesting historical features.

In the main plaza you can see the Roman Temple of Minerva, this was the original Roman square, although the road level is much higher now. If you know where to look, parts of the Roman Road still remain.

Assisi was a place I’d like to spend more time in, 2 days wasn’t enough. I’d love just to wander and get lost in its tiny roads and passages, sit and drink coffee or wine and just enjoy As this is Umbria ( see our food in Umbria post) there is no shortage of places to shop for, and eat, regional specialities, some with a view like this.

I’m not normally the sort to take tours, but having seen Assisi twice, once with a guide, once without, I was totally won over by the Assisi tour, we would have missed so much without.

How can I describe a whole city in one post? I can’t, it’s impossible.

All I can say is, you really should go. 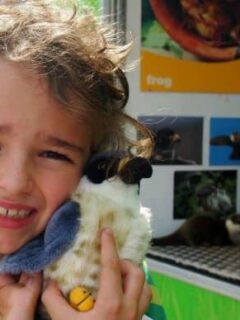 Previous
Peregrine Falcons in London
Next
Family Trip to Ireland - By Car With Kids
Click here to cancel reply.

I am not Catholic but went to Assissi, one of the most beautiful towns in Italy. I have always loved St. Francis as I am an animal lover and know his story. I entered the chamber where he is entombed and was suddenly overcome with the intense atmosphere, almost as if St. FRANCIS WAS THERE, and found myself and other visitors weeping. That is usually not me but the spiritual feeling there was so intense I could not help it. The town, although quaint, is very commercial, but this did affect the amazing atmosphere of the simple crypt. It is one of the most wonderful experiences of my life. I wear a St. FRANCIS medal and asked my children to make a pilgrimage there and remember me once I am gone. I will never forget it.

We, too, used Anne Robichaud to guide us around Assisi and surrounding environs (including a wine tasting). Anne is amazing in her wealth of information and local connections. I highly recommend Anne!

I loved Assisi, too. As a Catholic, I thought I'd love Rome, and I did, but Assisi was more spiritually meaningful to me. I wandered up an alley one day into an empty church called San Stefano and it was lit in two candles with ancient, worn frescoes on the walls. So great. I Would love to go back! Thanks for sharing your experience. Francis was quite a character, and remains one of those most significant saints in the Church.