In general, I believe that anything is possible, that’s mostly what’s got us where we are today. But if you’d asked me, even 3 weeks ago, if I ever thought I’d see a blue whale, the biggest creature that has ever existed on our fragile planet, the answer would have been a resounding “No!”.

I would have been wrong.

Their tongues alone can weigh as much as an elephant ( that’s impressive!).

The best place to see blue whales would be off the California coast. Or is it?

I really didn’t believe we’d see a blue whale. After an hour in what I considered an inadequately sized boat and seeing nothing more thrilling than a few flying fish, I was expecting to get our whale-no-show 50% refund.

A huge white plume of air and water shot into the sky ahead of us. The first thing we saw, the whale’s spout, the second a dark shape on the surface of the water. We’d found our whale. A huge and lengthy shape slowly gliding down into the depths giving us a flash of an enormous tail as he disappeared.

We saw several whales this morning, blue whales and the stockier right whales. We didn’t get very close and none of them were doing back flips for us, but it was an experience I wouldn’t have missed for the world.

My camera is still very sick indeed, but I’ve done my best with what I could get.

What Does Whale Watching in Mirissa Cost?

It cost us $100 for the four of us. The children were half price. That included transport from our guest house and a simple breakfast. If this was a whale watching tour in Australia you’d easily pay that much each. I have no idea what they charge you to see a whale in California, if you’ve seen a blue whale over there please enlighten me.

There were only 12 of us on the boat, we each had a life jacket and comfortable chairs, so comfortable most of us nodded off on the way back. The boat was small enough to scare me, I’m a land lubber, but perfectly adequate with shade and a raised viewing deck. The crew knew exactly what they were doing and where to find us a whale. Add to that the Sri Lankan charm, lovely manners and good looks and you’ve got an all round great experience.

Was This a Whale Friendly Operation?

Absolutely yes, our guys cared about the sea. As soon as whales appeared the crew cut the engines and drifted quietly so as not to disturb them. There are international whale watching standards. Boats must not get within 100 yards of any whale. They didn’t. Occasionally a whale would surface closer to one of the boats, there were 5 or so boats in the area, that was just good luck.

At one point a little boat with an outboard motor appeared on the scene and almost drove over a whale. Our guys weren’t standing for that at all, they screamed and shouted at this skipper and immediately called the coastguard to report him. The coast guard boat was with us very soon, in hot pursuit of this cowboy.

As we were enjoying a snooze after an early morning and all that fresh air, we passed the local fishermen returning with their catch. Now here’s a sobering thought, we’d travelled for over an hour by boat to get where we were.

These guys had rowed out there. Total respect for Sri Lankans!

Looking for a place to stay in Sri Lanka? Start your hotel search here.

Back to our Sri Lanka Family Travel Home Page 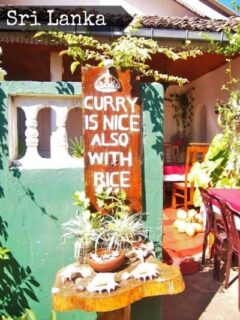 Previous
Why Go To Sri Lanka? 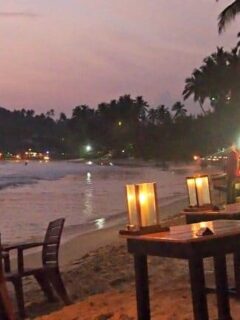 Whale watching in Mirissa is one of the top leisure activity that could be taken up by those visiting the southern part of the Island .In fact Mirissa is the world's No one hot spot for witnessing blue whales in their natural habitat.now for the well being of both the whales and human whale watching in Mirissa 100% regulated by the government.actually it is a once in a lifetime opportunity see these giants creatures swimming right in front of you come and enjoy it with us whale watching Mirissa

It was one of the most amazing things we ever saw. We see humpback whales all the time in Australia but these - if they were blue whales and obviously, we couldn't tell - awesome.

A really great company I used for whale watching are Whale Watching Sri Lanka. The experience was exactly as you described - friendly staff, breakfast, beverages and beer on the boat, a pick up from the hotel, the tour lasted about 4 hours and the children were half price. It cost us a total of $75 for 2 adults and 3 children (my under 6 year old was free). If you call Nihal the owner and book you can get a 50% discount.

It looks amazing, and in life size. Is made from rubber or? it can open its mouth to see the teeth?

We are a couple in Sri Lanka at the moment and loving your Sri Lanka posts. We head to Mirissa tomorrow, we will check out the accommodation you suggested and also hope to see the whales.

Which whale watching company did you use?

Hi Louise, I can't remember which boat, sorry, but they all go out together and end up in the same area. I don't think it makes much difference.

All hail the rowers! That really is amazing.

Well, alright, the blue whales were kind of cool, too :) .