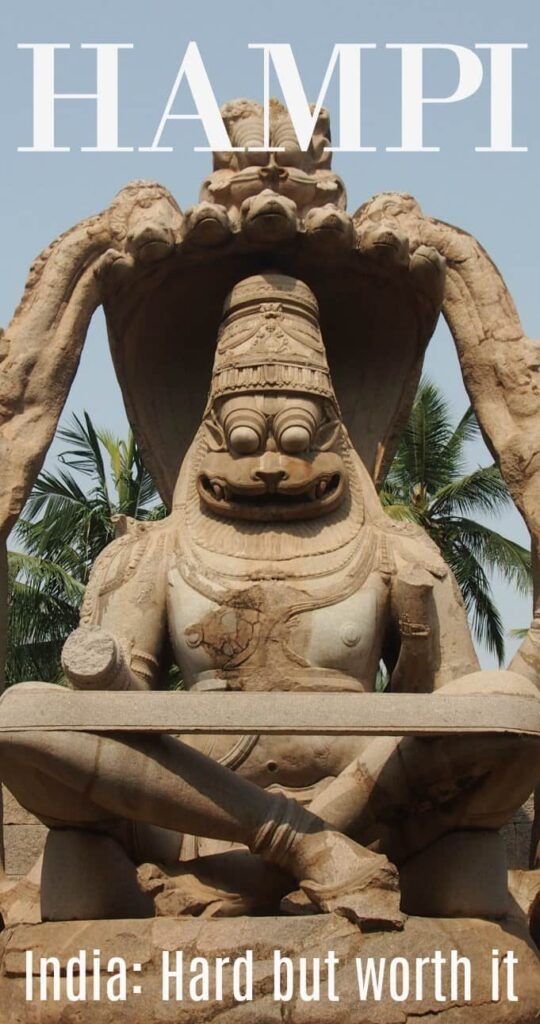 A blog on arrival in Hampi, finding a hotel, touring the ruins and travelling on from Hampi to Goa. Post 3 of our adventure in India, day 7 or 8-ish. I last posted from the relative luxury of a 2nd class AC sleeper train, just starting the 13 hour journey from Chennai to Hospet and Hampi. Hospet is on the rail line, the ancient, and huge city of Hampi is around 10Km away.

Hampi to Go and Visiting Hampi from Chennai

To Hampi from Chennai. Train to Hospet

The train journey started well, everyone was happy and well fed, enjoying biscuits and food brought to our seats by vendors. At every station they hop on and wander up and down the carriages declaring their wares.

It’s one of the things I loved most about India last time we were here.

I hate chai, it’s filthy stuff, but the vendors’ calls are atmospheric. Coffee comes with milk and sugar from an urn and is just as bad. I suffer through caffeine deprivation constantly.

We had to get off the train ( de-train, in India-rail speak) at 2am, so we got ourselves into our clean-sheeted bunks, feet on backpacks for safety, at around 7pm and tried to sleep.

2nd class AC gave us the luxury of a curtain to pull across the entry of our 4 berth cubicle, it didn’t really do as much as we hoped. ( we have never travelled in 2nd class before, only 3rd)

Despite my best efforts to fasten the velcro, every vendor would pull the curtains open, flooding us with light. Some would even stick their heads in to gawp at the foreigners and try to sell us a biryani as a late night bed snack.

We think this only went on till around 10pm, when James and I got some sleep. The kids slept like logs, travel is beautifully soporific for them.

2am at Hospet, we had a strictly timetabled 2 minutes to de-train. An official came to make sure we were ready to go and left us safely on the platform, you’ve got to love that.

Rickshaw drivers waited for us as expected, they sleep in their vehicles. We picked our way through the dozens of slumbering human and canine bodies to the road and told our driver which hotel we’d booked. We got there and it wasn’t great. A sauna with dirty sheets and mosquitos. I grumped and humphed and we left.

Luckily the online booking site hadn’t taken any money from us. As always, rickshaw drivers know where to go, he found us a cleaner hotel, with 3 beds and mosquito screens that almost covered the broken windows. It would do. (900 Rps, 9 pounds). The kids were their normal cheery selves, even at 2am, they really surprise me sometimes.

Touring Hampi by Rickshaw or Tuk Tuk With Driver

These rickshaw drivers are so attentive because they need your trade for the Hampi tour. It’s a big money ticket for them, a full day tour and at least 20Km. Our guy asked 20,000 Rps but agreed on 13,000 as we didn’t think the kids would be up to spending all day exploring in the heat. He would pick us up at 8.30am.

8am saw us leaving the hotel looking for food but our driver was ready and waiting to whisk us away to his preferred pure veg restaurant where we enjoyed dosas and a substance closely resembling coffee. Win! My first coffee since Mamallapuram, no paracetamol needed today for caffeine withdrawal.

Boo complained about Indian food for breakfast. He is always saying he doesn’t like Indian food, he does, he loves it, what he means is he wants pancakes. Well, some days pancakes just aren’t happening.

Off we went to Hampi, Boo riding shotgun in the front of the rickshaw, his smile back on his face. We left the busy town of Hospet, passing cows, pigs, chickens and freshly-scrubbed school children.

Women were drying cow pats on sunny walls to use for fuel and men were transporting sugar cane on heavily laden cow-carts.

We particularly liked the pink cattle below. A bad shot from a moving vehicle, but the pink is so pretty.

Most of the Hampi complex is free, except the big-draw elephant temple.

We spent half of the day touring the ruins ( which will have a separate post) before heading back to our room and The History Channel. Most Indian hotels seem to have good cable TV, but no internet.

This hotel operated a 24 hour check in policy, a fantastic idea and one that seems quite common in India. This means that because we checked in at 3am, we could check out at 3am the next day. Perfect, as the train to Goa left at 6.30am.

From Hampi to Goa by Train

James and our driver went back to the station to book tickets for our Goa trip. 8 hours, this time in sleeper class ( that’s 6 bunks per cubicle and 2 at the other side of the walkway, no windows, no curtains, no sheets, 3 fans per cubicle.

We figured that for a daytime trip the kids would cope fine with this style of carriage.

Boo burst into tears when he saw the dark, grimy cubicle and still-sleeping bodies. The bunks hadn’t been folded down yet and a man was occupying his. I felt like the worst mum in the world for inflicting this on him and joined him in the tears. He picked up quickly, James took him to his cubicle ( we had 2 berths in 2 separate cubicles, all that was available) and played Uno with him for hours. The kids later occupied the top berths, (which stay folded down for the whole trip, only the middle berth packs away) and happily played ninjas up there clambering from one bunk to another.

I developed the worst headache in the world ( no coffee again) and felt like death the whole way despite 6 paracetamol. Plenty of food and chai kept my 3 boys going, they all adore chai, two prefer massala, one plain.

Beggars are a constant presence in sleeper class, in 2nd class AC I think officials keep them out, but in sleeper they wander through all day. The eunuchs, castrated men, amused D. I’d already told him about India’s version of lady-boys and he was pretty pleased to meet a few in the perfumed sari-d flesh on this trip. They pass through the carriages clapping  and camping and asking for money to go away. They’re not too persistent with us westerners and their eye and body movements are dramatic fun. Sadder for my boys was the little boy, crawling between our feet using his shirt to wipe the floor. India can be gut wrenching.

We arrived in Goa passing down from the high country to the lush green and coconut trees, not entirely sure which station we needed to get off at. Our Hospet hotel had no wifi, despite claiming they did when we checked in, so we hadn’t been able to check and really were a bit lost.

We took a punt on Madgaon being closest to the Southern Beaches, we know the North of Goa very well but have never been down south before and wanted to take a look. We got lucky, right station. Closest beach to Madgaon is Colva, 10Km and 200Rps in a rickshaw ( we just asked), so that is where we went, intending to head down to long-term traveller favourite, Palolem the next day.

3 nights later, we’re still in Colva for various reasons, some great experiences, some extreme frustration and set backs. As always, very limited internet, so a very limited sot of post, I’m actually shocked by how bad the internet is here. This is my trip diary, something to remember for me and the kids. Thanks for reading. And Hi to my Dad if he’s reading, he says he does now, leave me a comment would you? Love you Dad xx

Read more of our India travel blog here, part one was about adjusting, India is very different to Thailand, part 2 was about getting to Mamallapuram and breaking down in a rickshaw.  We also now have a full India Travel Guide and Blog if that is your want.  Best of luck with Hampi! It’s one of the harder parts of India to get to because the trains don’t serve it well and hotels are questionable, but it’s a great trip and if we managed to get from Chennai to Hospet and Hampi and from there to Goa, with kids, so can you! Travel around India makes the best stories.

Loved reading your blog. I,m from India and want to thank u for the reason that you had the courage to take the plunge (along with your family). The heart wrenching scene you experienced is pretty common sight in here, Let's not discuss about the long-term govt policies to alleviate this. In reality, we can make their life better much faster by promoting more tourism in these areas. which you are doing.

I loved reading about your train trip Were off to goa January and going to organise to go to HEMPI by train we have looked at organised trips .. but will look into independent traveling now .admire you traveling with children. Thanks for your blog

Is Hempi the same as Hampi? Maybe you're thinking of somewhere else? I've never seen it spelled that way before.

Loved reading this Alysun! See! You write story posts too!! We are off to Hampi in a few weeks and I can't find ANYWHERE on the internet that's still available. I'm getting a bit scared now and having a meltdown. Everywhere looks a bit disgusting... Im off to bed now for a cry and in the morning will put my big girl knicks on. If you think of anywhere you can recommend, please tell me.xx

I do, but this post gets no traffic! Thanks for the reminder to do an SEO job on it. The place we stayed was a hole, but so what? Hampi is amazing and we had a brilliant time. It's a hard place to get to, if it wasn't it would be over-run with tourists like Sri Lanka. Be thankful for the grot and hardships! And how do you think I feel, we're going to Sikkim!! Not even sure I want to.

I want to do this with my boys but still not sure I and I say it again I can take the poverty..

Only one way to find out Deb! Parts of Cambodia and South Africa are the only two countries where poverty has smacked me in the face. Not India.

You are one intrepid traveler. The little boy on the floor would have had too much for me. I am glad you are able to take it all in. Sorry about the headaches. Are they migraines or just lack of caffeine? I take immitrex and it works quite well, but might not be easy to come by where you are-or maybe?

It's just lack of caffeine Karen. It's so hard to find something resembling black coffee or black tea in India. Milk in coffee or tea makes me gag and that's how they serve it.