We’ve just been on a mission to try the new cafe serving paleo food in Cairns.

It’s an hour in the car from Port Douglas to Cairns, a long way to go for lunch, but I was really excited to try out the Paleo Cafe on Grafton St. Cairns.

We’ve been dabbling in paleo for a few months, I’ve lost 4Kg and feel a lot healthier for it, we are finding paleo food absolutely delicious so I thought I’d go check out what the professionals could do with this eating plan.

UPDATE 2019: This restaurant no longer exists in this form.Today it is a gluten free restaurant and it’s still pretty good. We went along last week for gluten free chicken snitzel and fries for the kids, smashed avo on GF toast for me and nice smoothies and coffee. 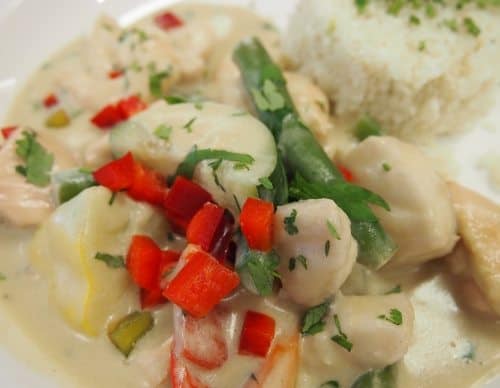 It’s a great menu, there is plenty of choice, I was tempted by the cauliflower soup and the paleo Caesar salad, in the end I settled on the Thai style seafood curry with cauliflower rice ($16)

It was great, cauliflower rice was a new one on me, I had to ask the waitress how it was done, it is blitzed raw cauliflower, steamed  How simple is that? It’s absolutely delicious and went extremely well with the mild coconut curry. Lots of vegetables and a very generous serving of prawns, salmon and barramundi. It wasn’t very hot, there were a few flecks of red chili, both the children enjoyed it.

We always taste each other’s food and get a conversation going about its qualities, it may be bad manners, but I’m a homeschooler, it’s education! 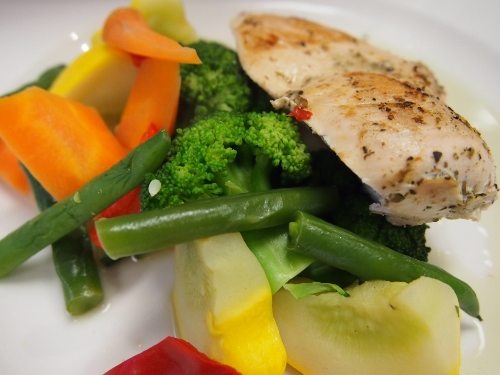 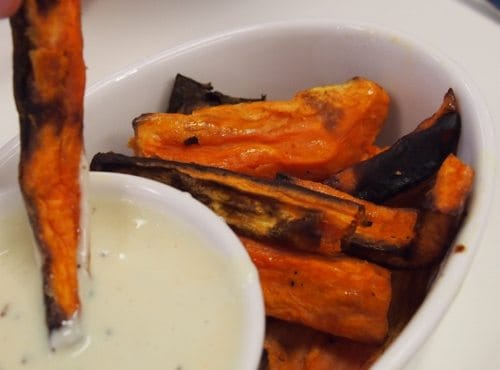 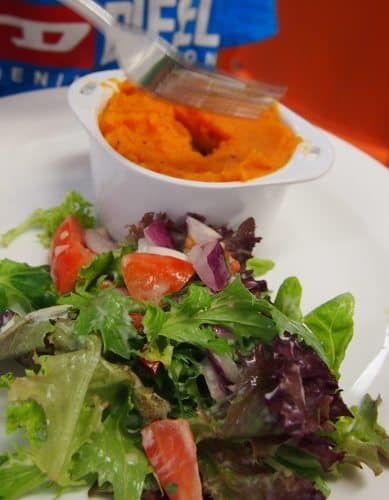 The Paleo Cafe was offering two children’s meals at $9 each, roast chicken and veg or paleo shepherd’s pie and salad, so we ordered one of each along with a side of sweet potato chips.

Very happy kids! They loved it. We are vegetarian at home but Boo has a bit of a chicken fetish, his paleo roast chicken was perfect for him, a huge breast portion, coated with herbs that gave it a fantastic flavour.

In my current version of vegetarian, fish and tasting things is allowed.

He polished off most of the veg, they were all perfectly steamed. He doesn’t like courgettes, but that’s his problem!

D’s paleo shepherd’s pie was great, too. You could taste the quality of the grass fed meat. Again, he ate the lot, and all of the salad. It’s nice to see a salad that isn’t just a garnish.

Wouldn’t you be happy to see your children eating so healthily? Everything on those plates was doing them good.

$8-$9 is about what you pay for a children’s meal in Port Douglas and Cairns, sometimes it’s frozen, battered fish and fries, I begrudge paying that much for rubbish, but this was well worth it. 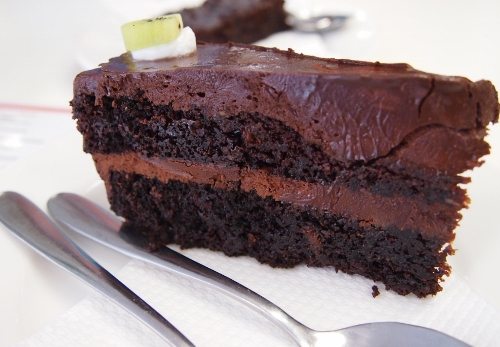 The paleo chocolate cake ($6) was sitting on the counter looking at us. We had to try, delicious, moist, chocolatey. You could taste the almond meal and the coconut. Really, really good.

So, if you are looking for paleo food in Cairns, or just fancy a healthy meal, try here, let me know if you like it! 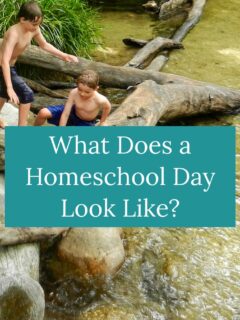 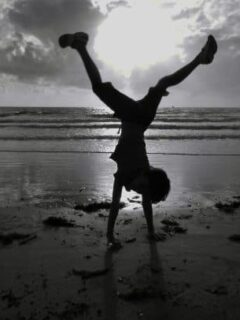 Alyson, I'm curious, are you still trying to eat this way on the road or have you scrapped it? I was doing some reading about the Paleo diet and it's interesting. It certainly seems doable except for no dairy part...I love my yogurt. And I'm not giving up coffee or the occasional glass of wine, no way.

No Renee, you just can't be precious about food when you're travelling or you'd die of malnutrition. I eat what I can get, when I can get it, but I'm not into carbs at all, rice, noodles etc. don't interest me, so the weight has dropped off.In Thailand I think I was being paleo without even trying, eggs for breakfast, soups and curries for meals, no rice. But, if all I can find to eat is carbs , I eat carbs, I eat meat sometimes, too. It's tricky to be veggie in some countries and I've not been eating fish, didn't trust it.. Sure, if you were just going for 2 weeks you could do it, but after 6 months of eating in restaurants 3 times a day I'd be ill if I didn't mix up what I was eating a bit. With paleo you can't eat pulses, I ate dahl every single day in Sri Lanka ( boy I miss those breakfasts!), you just couldn't do Paleo there. I've had hardly any dairy in Asia, it's just not common to have milk products there, so that was easy, but I'm pretty sure my calcium levels are too low, I usually eat tons of broccoli and green things at home, I've hardly touched anything like that in months.I very rarely eat fruit either, I haven't got a sweet tooth, other than the pineapple in my pinacoladas. I'm trying to top us all up with cheese and veg now we're in the UK. I'm as thin as I've been for years, which is great, but my diet hasn't been very good.Strange isn't it, at home I used to stress about dietary things and I was overweight, now, eating out every day and not being picky, I'm back to my fighting weight.

That looks delish! I am even thinking about becoming your version of vegetarian after reading this post!

It's tricky doing paleo as a vegetarian, no pulses, including hummus. I've just done a month of being completely vegetarian and then discovered paleo and lost 4Kg. I'm finding it impossible to be 100% happy that the children are getting enough protein on nuts and eggs, so some meat is slipping back in for them. There wasn't a children's vegetarian meal on the menu. Boo was very keen to be vegetarian, but he loves chicken, strange, as it's something I really don't like buying, he's only had it in places like Thailand. I'm too much of a foodie to not taste everything! I don't buy meat at home and I rarely eat fish unless we are out. My husband's restaurant does a lovely little wild mushroom tarte Tatin, but that's not paleo, obviously. I was vegetarian for 10 or 15 years before we moved to Australia, but I've always been happy to eat fish sometimes and taste local dishes when we travel. I don't like saying I'm pescatarian because that seems to suggest I eat fish at every meal, which I don't.

looks delicious. i was just wondering if the Chef was already making this at home?

Anabel honey, chefs do not cook at home, ever. He's quite into paleo though, it's how he eats when he's training for iron man events, although he packs away a heck of a lot more animal protein than me. I keep it as vegetarian as I can but vegetarian paleo is pretty hard to do, no pulses.

Isn't it just, Bethaney. I need to talk to my husband the chef about putting something paleo on his hotel menus, it's so popular these days.

What a brilliant idea for a restaurant! I'd go!!